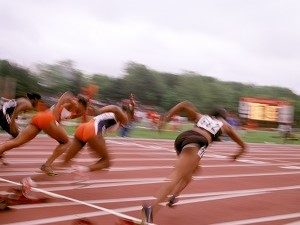 Competitiveness is a measure of a person’s desire to surpass others. A highly competitive person is more likely to see a situation as a competition, even when there is no explicit winner or loser. For example, a teen may compare their social media popularity to their friends’ rankings, even though there is no explicit reward for having the most followers. The individual’s rivals may not even realize they are competing.

During a game or contest, a competitive person may go to great lengths to be victorious. Competitiveness can motivate a person to work harder than they would have alone. However, an individual who feels they must win at all costs may burn themselves out or alienate others. When competitiveness causes emotional distress or disrupts someone’s daily life, that person may wish to get professional help.

COMPETITIVENESS IN BIOLOGY AND PSYCHOLOGY

Competition by itself is neither good nor bad. In biology, competition between organisms is a natural result of evolution. All organisms must compete for a limited number of resources, such as food, shelter, or mating partners. Humans’ tendency to compete may be a natural outgrowth of this biological competition.

Some kinds of competition can indirectly affect one’s ability to survive and have offspring. For example, a singer who competes to win a million dollars can then afford to eat nutritious food, buy a home big enough to house lots of kids, and so on.

However, the psychological trait of competitiveness often has nothing to do with survival, although the tendency to compete might be a natural outgrowth of biological competition. Healthy levels of competition can help improve self-esteem and increase enjoyment of life. It can also motivate people to work harder toward their goals.

Competitiveness is often described as a personality trait. However, it is much less stable across the life span than traits such as neuroticism, extroversion, and novelty-seeking.

WHEN IS COMPETITIVENESS A PROBLEM?

It is possible to be hypercompetitive, which researchers define as having “a neurotic need to win at all costs.” Hypercompetitive individuals are more likely to have a Machiavellian world view. In other words, they may believe “the ends justify the means.” A Machiavellian person may threaten rivals, steal resources, or tell lies in order to get ahead.

Excessive competition can also hurt the individual themself. A person may spend so much effort training to succeed that they neglect other parts of their life, such as friendship or hobbies. This can quickly lead to burnout and isolation.

People who constantly compare themselves to others may develop chronic feelings of inadequacy. Since no one is good at everything, competitive individuals always have someone to lose against. The constant quest to be the best may lead to perfectionism, stress, and other issues.

If competitiveness has affected your daily life, you may benefit from professional support. In therapy, you may work on:

A trained therapist can help you reach your goals in a healthy way. There is no shame in getting support when you need it.