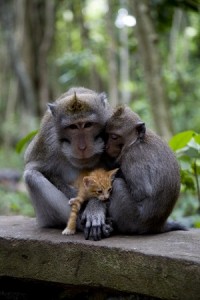 Altruism is the act of doing good things for others out of concern for their well-being. It is closely related to compassion and empathy, and altruistic people are people who tend to frequently show concern for others’ welfare.

The Science of Altruism

Altruism is not a strictly human trait. Mammals and many other animals show varying degrees of altruism. A mother bear who risks her life to save her cub is demonstrating altruism. Numerous studies have demonstrated high degrees of altruism in apes and other primates. For example, a primate is highly likely to not take a food reward if taking the reward means that another ape experiences an electric shock. Animals also show an awareness of fairness, which is a component of altruism. Many animals react with frustration or anger when one animal is given more food than they are.

Philosopher Thomas Hobbes famously described life in nature as “nasty, brutish, and short.” The study of altruism has frequently been used to undermine his contention. In recent years, evolutionary psychologists have turned their attention toward altruism and have argued that it is fundamental to the survival of the human species. Several studies suggest that animals are more likely to display altruism toward closely-related conspecifics rather than to strangers or unrelated animals. Evolutionary psychologists have also pointed to reciprocal altruism as playing a role in survival. An ape, for example, might groom an injured ape one day and then, when he himself is injured, be more likely to receive grooming from the ape he once groomed.

Some scientists, however, have pointed out that this may not apply to people, whose sense of justice is heavily influenced by culture. Other studies have demonstrated that animals will show altruism even to unrelated other animals, and will occasionally show altruism even without the hope of getting something in return. Thus altruism seems partially related to the desire to continue the species but may also be an individual choice made by animals, particularly highly intelligent animals such as humans and primates.

Altruistic people tend to be happier than other people. Volunteer work and charity donations can help raise a person’s self-esteem, and some psychotherapists recommend altruistic behavior to help their clients cope with depression, grief, or stress. A person’s degree of altruism may also be influenced by his or her relative comfort. A starving person, for example, may be so focused on survival that he or she is unable to focus on altruism, while someone who has his or her basic needs met is better equipped to serve others. The ability to relate to other people is also closely tied to altruism. When a person sees another’s suffering as undeserved, he or she is far more likely to display altruistic behavior.