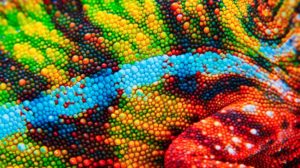 Adaptation is a concept in the theory of evolution. Under this theory, an adaptation is a trait in an organism that evolved through natural selection to serve a specific function. The term adaptation can also be used colloquially to refer to healthy behavioral changes.

Evolution does not consciously guide the development of organisms, and nothing evolved for a specific purpose. Instead, evolution is random and determined by survival, producing mutations that result in a genetically varied population. In any given species, each animal may have slightly different genes or capabilities. When environmental pressures make one trait more useful than another, animals with that genetic trait are more likely to survive. For example, the large, complex brains of humans could be an adaptation that allowed early people to travel, communicate, solve complex environmental problems, and develop settled civilizations.

An adaptive trait stands in contrast to a maladaptive trait—a trait that makes an organism less prepared to deal with its environment and more likely to die off.

The term “adaptation” can also be used to describe behaviors that serve a person well. For example, a therapist might tell a client that good communication skills are an adaptive behavior. In this context, the term has a similar meaning to the biological use, because adaptive skills make life easier. The difference is that, in colloquial usage, people are not necessarily speaking about evolved traits when they mention adaptations.

The term sometimes refers to deliberate changes in response to the environment. For example, a newly divorced person might go to therapy to learn how to adapt to a new way of life, with a new relationship status and new goals.

Much like certain physical traits may survive from generation to generation when they help an organism survive, current research indicates some psychological traits, or adaptations, may act in similar ways.

In the medical field and psychology, the term adaptation may also be used to discuss general adaptation syndrome, which is the body’s process for responding to stress.

General adaptation syndrome takes place in three stages, which are:

While general adaptation syndrome is a natural physiological process, it can negatively impact an individual’s mental health when their stress responses become out of control or difficult to manage. Practicing relaxation techniques, such as breathwork or meditation, may help. If you feel overwhelmed by stress, a mental health professional may help you problem-solve and learn skills to gain control over the stressors in your life. Find a therapist near you.

Hedonic adaptation, also called the “hedonic treadmill,” refers to the research-proven tendency of people to revert fairly quickly to stable levels of happiness after a painful or pleasurable event. It can also be applied to a variety of strong emotional states and could explain why people become accustomed to events they’ve been repeatedly exposed to. This tendency may be due to a psychological adaptation that keeps us grounded and focused on current issues that demand our attention.

While the two concepts share some similarities, hedonic adaptation is ultimately different from the process of desensitization. In hedonic adaptation, a person’s view of an event as positive or negative gradually revert to a more neutral view of the situation. Meanwhile, desensitization refers to a more general lack of perception or response to an event that once caused a response.