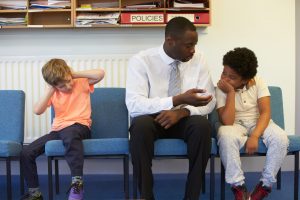 Negative feedback from teachers can increase concentration issues, disruptions, and overall negative behavior in students, according to a new study published in Assessment for Effective Intervention. Teachers may use negative feedback in an attempt to curtail problematic behavior among children, but the study suggests this approach has the reverse effect.

For the study, Wendy Reinke—an associate professor of educational, school, and counseling psychology at the University of Missouri College of Education—and her colleagues developed a tool for monitoring student-teacher interactions. The Brief Student-Teacher Classroom Interaction Observation (ST-CIO) tool requires a five-minute observation period to assess whether an interaction is negative or positive.

Using the ST-CIO, researchers observed 53 teachers’ interactions with 896 students in kindergarten through third grade. They found the tool was able to capture information similar to that captured by longer observations, suggesting the ST-CIO might be a good way for principals, researchers, and others to quickly assess student-teacher interactions.

The researchers then observed a correlation between teacher-student interactions and student behavior. Students who received more negative than positive feedback from their teachers during the year had a significant increase in disruptive behavior, concentration difficulties, and problems with emotion regulation by the end of the school year. Students who received positive feedback saw no such increase and were more likely to engage in positive, prosocial behaviors in the future.

The Role of Teachers in Student Mental Health

The study notes that previous research has linked student-teacher interactions to both academic and behavioral outcomes. Most students spend six to nine hours each day with their teachers, which may be more time than some students spend with any other adult.

Particularly among students who come from struggling families, whose parents are uninvolved, or whose families are abusive, teachers may fill an important void. Teachers may also be the first to notice signs of learning difficulties and mental health diagnoses such as attention-deficit hyperactivity.