The Masks We Wear: Could They Be Good for Us? 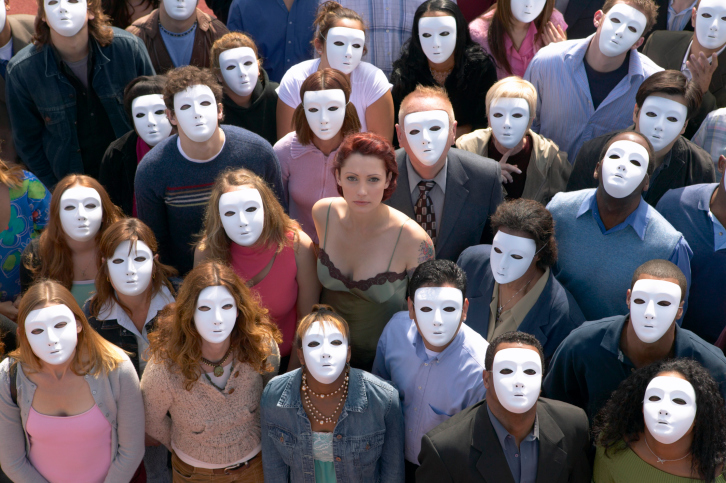 There are times when we aren’t necessarily our best selves—times when we’re tired or cranky, feeling less than capable, unsure which direction to turn, anxious, or just plain “off.” Frequently in those moments, we compensate by putting on a “mask” of sorts.

We sometimes put on a mask to protect us from letting others see us as weak or imperfect (and the truth is, we don’t like to see ourselves that way, either). Generally speaking, we don’t want others to see us sweat. We often associate masks with being less than authentic.

However, a positive phenomenon can take place when we pretend to be something we’re not. Have you heard the expression “fake it until you make it”? When we take on the characteristics we’d like to possess, practice them with regularity, and change our behaviors in order to better match those traits, we may find ourselves becoming that which we originally pretended to be.

The following are five masks that many of us wear when we’re feeling “less than,” and how they sometimes serve us well:

Ever tell others “I can do this!” while your inner voice is whispering “no, you can’t”? It can be incredibly powerful to let that mask of confidence win the debate. When you project confidence, others believe you and often mirror it back. When that happens, you can begin to see yourself as competent and able in others’ eyes, and you may be more likely to follow through and behave accordingly. Before you know it, you’re demonstrating to yourself and others that you’re capable of things you previously questioned.

Have you ever kept yourself from losing control in a crucial situation while still feeling anxiety or fear? People in positions of authority (parents, teachers, coaches, executives, law enforcement) are often required to project calm in times of chaos and confusion. This doesn’t necessarily mean they ARE calm. They assume the mask of calmness because it is what the situation dictates and because they know if they don’t, things may get worse. Sometimes it can be enough to have just one person suggest that calm is the way to be; others will typically follow suit. This can be a useful strategy in diffusing a tense or stressful situation.

Have you heard the expression “fake it until you make it”? When we take on the characteristics we’d like to possess, practice them with regularity, and change our behaviors in order to better match those traits, we may find ourselves becoming that which we originally pretended to be.

Do people look to you for decisions or direction? If so, you probably don’t ALWAYS have all the answers. However, it can be comforting to others if you convey a sense of certainty when you make choices. It’s important to wear this mask carefully. You don’t want to speak with authority on topics you know nothing about—better to honestly share that you have no expertise in certain areas. But if a decision about how to move forward is needed and you’ve got a pretty good idea about how to do that, make your choice or give your opinion with a degree of certainty and pay attention to how others respond. They will likely listen more carefully, and be more likely to pledge their support, than when you give a response couched in skepticism or doubt.

Ever arrive at a party telling yourself you’ll stay only an hour and end up being the last one to leave after a wonderful evening? You likely started out wearing the mask of cheerfulness or enthusiasm while actually wishing you were somewhere else. Along the way, you became engaged and more present, and in so doing discovered that you are having fun. Sometimes we force ourselves to do things we’d rather not, or challenge ourselves to be personable when we’d rather be off on our own, and we are surprised and pleased to find we can connect in a positive manner, and we become energized as a result.

Have you ever demonstrated interest in something when you actually felt indifferent about it? Sometimes what happens is you start out simulating that you’re an interested party, or simply going through the motions because you feel pressured to do so, but before you know it you’ve connected with someone or something that impacts you in unexpected ways. This might happen as you enter into a simple conversation, or you begin volunteering because others you know are doing it or because you’re expected to do so, and then you find yourself falling in love with the mission or cause. It’s not uncommon for people to discover that they care more than they originally imagined.

Have you faked one or all of these traits? Which masks have you worn, only to uncover those very strengths within yourself along the way?