How Mindfulness Helps Soldiers Before and After Combat 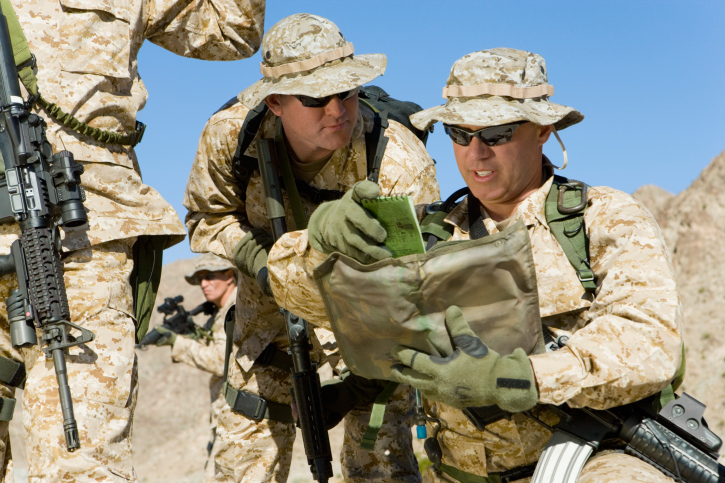 Research on mindfulness shows that it can be beneficial for improving a person’s attention, mood, pain tolerance, and immune function. It can also be used to reduce stress and increase a person’s cognitive functioning. Therapists use it to treat depression, anxiety, drug addiction, and a vast number of other mental health issues. Recently, the practice, rooted in some of the principles of Buddhism, has found an unlikely advocate in the Department of Defense (DoD), which has also started using mindfulness to help soldiers prepare for and return from combat.

Its use in the military is considered somewhat controversial by some, as traditional mindfulness practices are often associated with an opposition to conflict and the promotion of peace.

“Mindfulness can be used as a tool to manage attention, regulate affect, and monitor cognition,” mindfulness practitioner Andrew Archer, LCSW said. “I imagine this form of grounding and centering could prepare people for extremely charged, chaotic environments. However, mindfulness has been best practiced with the act of conscientious objection to war.”

Why Is Mindfulness Taught in the Military?

Proponents of mindfulness training for the military explain that although war is not ideal, it remains a reality for society today. If soldiers must participate in war, they should receive training that will not only help prepare them for combat, but also help them manage the stress and trauma associated with it.

For the military to be successful, soldiers must be able to absorb a large amount of information at once and be able to make quick decisions without succumbing to overwhelm or stress. For this reason, mindfulness-based training programs are being introduced in the military, one of the most visible being Mindfulness-based Mind Fitness Training (MMFT).

MMFT is a 20-hour course designed to increase resilience to stress for those working in high-stress environments. The program is based on the principle of mental fitness. Mentally fit, according to the program, is defined as being efficient in four capacities:

Mindfulness training teaches these important skills that not only help soldiers on the battlefield, but also help ease their return home.

The period before a combat deployment for many in the military is highly demanding both mentally and physically. Not only are service members intensively training for their upcoming mission, but they’re also psychologically preparing to leave their families behind and enter into a dangerous environment.

The University of Miami conducted a mindfulness study of 75 soldiers stationed in Hawaii awaiting deployment to Afghanistan. The results of the study indicated that just 8 hours of mindfulness training during an 8-week period helped improve the soldiers’ attention span and prevented their minds from wandering when subjected to tests that measured those factors. The University of Miami study suggests even brief mindfulness training programs may help improve the cognitive functioning of deploying military personnel.

The University of California, San Diego School of Medicine and Naval Health Research Center published a study in May 2014 in the American Journal of Psychiatry that explored whether integrating mindfulness practices to increase mind and body awareness into pre-deployment training could help reduce the occurrence of posttraumatic stress (PTSD), depression, and anxiety in returning soldiers.

During this study, pre-combat Marine infantrymen learned various mindfulness meditation techniques, including interoception, which is the ability to help the body regulate and sustain its homeostasis by cultivating awareness of bodily sensations such as heart rate, stomach tightening, and skin tingling. The Marines then underwent a mock combat scenario with a highly realistic ambush in a scene designed to resemble one they might encounter in the Middle East. The study examined the Marines’ heart and breathing rates and compared the results of those who received mindfulness training to a group that did not. The group that received mindfulness training returned to baseline sooner than those who hadn’t.

Virtual mindfulness training programs have also been used to help teach veterans mindfulness practices as well as connect them to a larger veteran community, all in the comfort of their own homes. Coming Home, a project developed by the University of Southern California’s Institute for Creative Technologies and sponsored by the U.S. Army’s Research, Development, and Engineering Command, is a post-deployment transitional support program offered virtually to veterans who are reintegrating into civilian life. Through this program, veterans learn the principles of mindfulness-based stress reduction using an avatar character in the 3D virtual world of Second Life. The program not only helps veterans learn mindfulness and reduce stress, but it also provides a social component, which may be especially valuable for veterans living in areas where they may not have access to services or a larger veteran community locally.

Research continues to reveal benefits mindfulness training provides for soldiers both before and after combat. These benefits in some cases have the potential to be life-saving, both from improved situational awareness and stress resilience during battle and from decreasing the intensity and occurrence of posttraumatic stress symptoms, which are often linked to a high rate of veteran suicides.