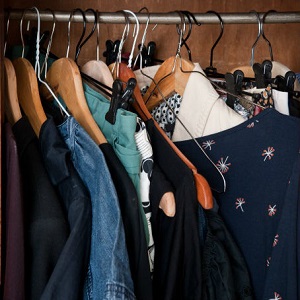 While working in my office in the summer, on a hot day, I had cause to consider the clothing I was wearing. My office is on the second floor, and by mid-afternoon the sun had moved over to my side of the building. Even with the AC blasting, it gets swelteringly hot.

I wear sleeveless tops and skirts or capri pants, and sandals. This isn’t so for everyone. I know lots of people who do not like the heat. I find that people who come to see me for help with eating disorders have their own unique set of concerns, activated by the hot weather. I know that folks who have larger bodies, or are obese, often will feel hotter, simply because the adipose tissue provides insulation, in much the same way that very thin people or people with anorexia are more sensitive to the cold.

And I’ll digress here a moment, and say that when I make reference to people with larger-bodies, I strive to use language that isn’t charged with judgment. To refer to a person as fat is usually considered an epithet rather than a statement of fact. Webster’s Dictionary defines fat, when used as an adjective and applied to a person, as “having large amounts of excess flesh.” To people who experience eating disorders, it goes beyond that, to a sense of being unlovable, unacceptable, unwanted, and, ultimately, in danger of being utterly alone.

Which brings me back to hot weather and clothing: some of the large-bodied people I work with come to sessions in jeans in 95°F weather. This looks horribly uncomfortable. There was a time when I was  in the throes of a binge eating issue. My body was much larger than it is now. The inseams of my jeans would develop holes where my thighs rubbed together. The waistbands and snaps pressed painfully into the flesh of my belly. I hated cool weather because it meant I couldn’t wear light, loose clothing. So when I sit in my office across from some one whose body has large amounts of “flesh” and see them in jeans, I can’t imagine that they are comfortable. When appropriate, I ask why they are dressed so heavily in such heat.

People give varying answers. Some have to do with their dislike of shopping due to how disheartening it can be to find plus-sized clothing in stores. Others can’t stand dealing with the difficulty of finding appropriately-sized clothes. One such person I work with wears plus-sized petites, another wears a much smaller size on top than on the bottom. Clothes shopping makes them feel at odds with what is “normal.”

Shopping for clothing brings up shame some people spend lots of energy trying to ignore. Webster’s defines shame as, “a painful feeling of humiliation or distress caused by the consciousness of wrong or foolish behavior,” and, “a loss of respect or esteem; dishonor.” In this case, the “wrong or foolish behavior,” as decided by social norms, is the size and shape of their bodies.

This body-shame isn’t limited to people with a large body in our society. I often hear complaints about finding satisfactory clothing from people who have bulimia or anorexia. They reportedly try on several outfits before they can leave the house, because everything makes them “look fat.”

People with anorexia routinely say that they can’t stand the feel of clothing that lays against the skin of their hips and legs, so they buy pants that fit loosely and might wear a belt to hold them up. Conversely, I know people with bulimia who tell me that wearing baggy clothes makes them look as big as the clothing, so they only feel comfortable in clothing that is form-fitting.

Body-shame is commonly focused on specific regions of the body. I’ve had people tell me, “I don’t show my legs,” or “Nobody sees my arms.” One individual with life-threatening anorexia told me that no matter how much weight she loses, her thighs are too big. Another said that, although everyone tells her she is emaciated, she has “rolls” on her stomach and waist that are “disgusting.” When she and I discussed this further, I discovered that these were the skin folds that appeared when she sat down. Yet another, whose anorexia manifests most prominently in compulsive exercise, is quite muscular with a very low body fat percentage. She said she sits up very straight because she is so self-conscious about the size of her stomach.

Clothing and vanity are both normal parts of human life. But there’s a fine line between “normal” (there’s that word again) attentiveness to appearance, and serious obsession or shame. For a person who experiences shame, their body image is inseparable from his or her character and worth.

Consequently, clothing choices aren’t based on physical comfort but, rather, psychological comfort: the comfort that comes from knowing their legs or arms or stomach are covered, even if it means wearing jeans in 95°F weather. I’ve been encouraging the people who are larger-bodied to go shopping for light, pretty summer clothing. My hope for everyone I work with, is that they choose clothing in the spirit of physical comfort and body acceptance.