Richard Bandler is a contemporary psychologist and self-help author who works primarily in the field of Neuro-Linguistic Programming (NLP).

Richard Bandler was born on February 24, 1950. He studied psychology and philosophy at the University of California and earned his bachelor’s degree in 1973. Two years later, Bandler received a master’s from Lone Mountain College in San Francisco.

Bandler was an associate of both Robert Spitzer and Milton Erickson. He is an expert in the field of self-help and is the co-founder of Neuro-Linguistic Programming with John Grinder.  He was first introduced to John Grinder while a student at the University of California. Grinder, one of Bandler’s professors, collaborated with Bandler in the exploration of linguistics. This alliance led to the first of many books the two would publish, The Structure of Magic, Volume 1.

Although Bandler went on to train and educate people in the method of NLP, he continued to do so without the help of John Grinder. Beginning in 1996, Bandler and Grinder were embattled in litigation over ownership rights to NLP. After several years, the two agreed to acknowledge the other’s contribution to the creation of NLP, but they have not worked as partners since the early 1980s.

Bandler has published numerous books and articles. Bandler studied bodywork and examined the Feldenkrais Method in his book, The Elusive Obvious. He travels the world giving lectures on NLP and his other theories. He continues to train clinicians and individuals in the practice of NLP and other self-help techniques.

Neuro-Linguistic Programming (NLP) is a therapeutic, self-help technique that focuses on behavior and language. By enlightening people to healthy patterns of communication, therapists teaching NLP can show clients how to transform their behaviors in order to achieve a desired outcome. Although there is little scientific evidence supporting NLP’s effectiveness, therapists who practice NLP believe it is beneficial for relieving psychological symptoms related to several problems, including depression, cognitive impairments, anxiety, and phobias.

NLP strives to model highly effective behaviors and replicate them in clients, thus providing a form of autonomous self-help. NLP has been accepted as a viable method of change within business, alternative medicine, community settings, and within the self-help field in general, though it has not been scientifically validated with empirical studies. Regardless of the academic and professional support it lacks, NLP continues to be a widely used technique throughout the mental health field.

Bandler faced legal problems in 1986 when one of his students, Corine Christensen, was found shot to death with a gun that Bandler owned. Bandler claimed that he was present during the shooting and unable to stop another man from shooting Christensen. He was ultimately found not guilty, and Christensens's death remains unsolved.

Bandler has developed several techniques that he has trademarked, which is a fairly unusual practice in the world of psychology. These techniques include Design Human Engineering and Neuro-Hypnotic Repatterning. They are similar to the theories of Neuro-Linguistic Programming. 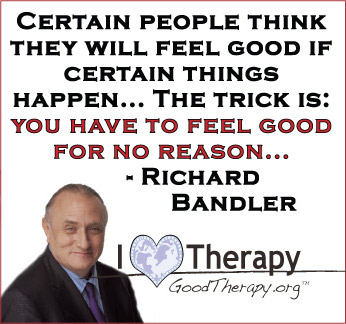