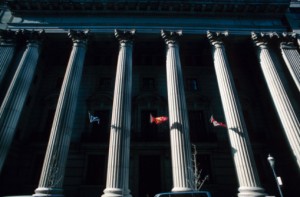 Jaffee v. Redmond (518 U.S. 1; 1996) was a landmark Supreme Court case that protected a therapy client’s right to confidentiality. Before this case, the courts did not recognize said confidentiality and could order defendants to release therapy records, citing refusal to do so as an indication that the notes on the sessions could indicate the defendant’s culpability.

In the course of duty, Mary Redmond, an Illinois police officer, shot and killed Ricky Allen, claiming to have done so in order to prevent him from stabbing another person. Allen’s family sued her for use of excessive force, citing testimony that conflicted with Redmond’s description of the event. When Redmond entered counseling after the shooting, Allen’s family attempted to obtain information about the counseling sessions in the pursuit of their lawsuit against Redmond. Although Redmond and her therapist refused to submit testimony about her sessions, believing she was protected by psychotherapist-client privilege, the court found that the Federal Rules of Evidence did not establish that right to confidentiality and told the jury that it could draw negative conclusions from the therapist’s refusal to testify.

The jury found Redmond guilty and awarded Allen’s family $545,000 in damages. However, the Seventh Circuit court reversed the judgment, finding that as each state recognized some sort of therapist-client privilege, the Federal Rules of Evidence did also recognize said privilege, however indirectly. Upon the reversal, the plaintiffs appealed to the United States Supreme Court.

When the case reached the Supreme Court, the American Psychological Association (APA) filed an amicus brief, or a brief in which an uninvolved organization or individual explains why the court should rule a particular way in the case, emphasizing the extreme importance of therapist-client confidentiality. The Supreme Court agreed with the Seventh Circuit and the APA, ruling that the Federal Rules of Evidence did establish a right to confidentiality and noting that protecting that privilege is an important public policy, as an individual who wishes to seek treatment for issues that concern him or her might be reluctant to do so if the therapy sessions might not necessarily remain confidential.

Protecting client confidentiality was an ethical duty of psychotherapists long before Jaffee v. Redmond. However, it was not clear whether psychotherapists who were called to testify in federal courts were required to testify or if they could protect the confidentiality of the people they were treating. Because the Federal Rules of Evidence left it to the courts to make that decision, the court in the original lawsuit had required the therapist to testify.

The Supreme Court ruling on Jaffee v. Redmond, however, made it unmistakably clear that a psychotherapist’s duty to those in treatment was to maintain the confidentiality of their sessions. Confidentiality is only upheld as it pertains to scheduled sessions of treatment, however. Statements made to therapists in private meetings are not considered by the courts to be made in the course of treatment, and so they are not protected by the Jaffee ruling.

An exception to confidentiality may occur when a person in treatment threatens grievous bodily harm to another, necessitating a so-called Tarasoff warning. In this case, a therapist’s duty to warn precedes protection of confidentiality.