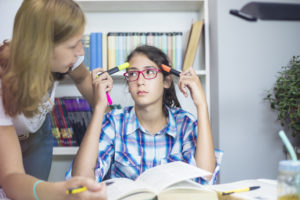 What Is Helicopter Parenting?

A 2014 study found that helicopter parenting is more common when a child lives at home and has few or no siblings.

Parenting is challenging work, and many helicopter parents defend their behavior by insisting they are supporting their children to become healthy, successful adults.

Helicopter parenting limits a child’s chances to explore the world on their own or learn from trial and error. Some studies suggest that helicopter parenting can make children less resilient or lower their sense of self-efficacy.

A 2011 study found a correlation between helicopter parenting and worse mental health. Children of helicopter parents were also more likely to take medication for anxiety or depression and to use pain medication for recreational purposes. Helicopter parenting may also create immense pressure to academically succeed. A 2017 study found that mental health issues are increasing among college students. A number of recent articles suggest that a competitive campus culture may be driving the college suicide rate.

The Effects of Helicopter Parenting

Some research points to a positive side to helicopter parenting. A 2014 study found that increased parental involvement could decrease drinking in first-year college students. Involved parenting may help children’s self-esteem, but excessive involvement can make it difficult for a child to develop an independent identity.

Parents who want to give their children more autonomy should be mindful of the factors motivating their parenting style. Managing anxiety through meditation, deep breathing, exercise, or therapy can be helpful. Parents should also practice open communication with their children rather than treating communication as a unidirectional project through which parents tell children how to think and feel.

Relationships with people who have a positive parenting style can also be helpful. Parents often emulate their friends’ parenting style. Parents whose friends are more relaxed may also feel less pressure to constantly intervene in their children’s lives.

It can be challenging to let go or relax, particularly when a parent is plagued by anxiety, concerned with fears of inadequacy, or worried about a child failing. Therapy can help parents understand their own parenting style. It can also foster better communication between parents and children. Find a therapist who specializes in parenting issues and helicopter parenting here.