Growing Together, Individually: We Are Designed to Love Autonomously 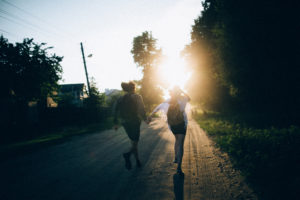 In part 1 of this series, we touched upon the blissful and frightening states that can occur when we feel merged with a partner whom we love. These states are drawn from our earliest experiences outside the womb and tend to awaken parallel states of extreme helplessness. As exciting as these experiences of full absorption can be, humans are not designed to remain helplessly dependent. We are designed to learn to love autonomously.

One of the primary feats of early development is the forging of a self separate from mother. Out of the cacophony of fleeting images, sensations, drives, and demands swirling within our infant experience of the world, we somehow identify enough patterns within the chaos from which to propel our very own imprint of that world. The acorn cracks and the sapling lifts its first tendrils toward the sky. As our distinct character emerges, we begin the long craft of personalizing our experience. We learn to abide by a singular rhythm that makes sense only to ourselves while somehow maintaining the approval of mother.

The journey toward becoming a “me” continues from the first year of life well into our 20th. Then, just as we’ve gained some mastery at selfhood, we attempt to reverse the journey. We long for experiences of merging with another: adult intimacy. Our self-will, though still active, takes a back seat to the more instinctual parts of our brain. One day we are content to greet the object of our desire from a distance; the next there seems to be no distance at all. Before we know it, the fragile “me” we’ve carefully constructed over the years has merged into a “we.”

Just how we experience adult intimacy depends as much on our inborn character as it does on how we differentiated our self from our primary caregiver. Below, I refer to four of the later separation-individuation stages, as defined by classic psychologist Dr. Margaret Mahler, for clues as to how we first managed the capacity to hold on to—while separating from—our merged existence with mother. The marks of these infant/toddler achievements make a dramatic reappearance in the work of adults attempting to navigate bonding—while maintaining autonomy—with their life partners.

Julie has felt hopelessly in love with Brian for a few weeks now. They’ve consecrated their affections during long weekends together, and the melding seems to have lifted Julie beyond time itself. With Brian, she feels solid and truly herself. During the intervening weeks without Brian, however, Julie feels she has lost any capacity to go through the motions of ordinary life. She doesn’t miss Brian or recall their time together. Instead, she finds herself unable to function at all. Having identified her true self as that which is beyond her grasp, she has no self left with which to even dream of reunification with Brian.

We might pity Julie, but we all remember at a visceral level the trouble she’s in. Waking hungry in our crib at night, we cry out and are met with no immediate response. No sound of approaching comfort. It takes but a few minutes before our cries threaten to steal our breath from us. We are inconsolable. We learn the dark contours of an unmerciful absence and we don’t forget it. How do we survive these early stages of helplessness?

We learn the dark contours of an unmerciful absence and we don’t forget it. How do we survive these early stages of helplessness?

We start, during what’s called “hatching,” by learning to hold on to imagery of our caregivers. Babies at this stage become obsessively interested in the sights and smells associated with mother. Mothers report there being a dramatic increase in the intensity of their child’s attachment at this stage. Fathers report feeling far less replaceable. During the hatching stage, babies are ingesting the image of their mother into their minds. The eventual result: the arising of an internal representation of the mother’s life-giving forces.

Revisiting the primal instinct for this transition in her adult life, Julie might ask Brian if she can keep his jacket so she can wear it during the week or update her profile with photos of the two of them, training herself to identify with the accessories and imagery of their partnership. To friends and family, Julie may appear more helpless than ever as she begins to fixate on her phone, always anticipating Brian’s next text or rereading old threads. But in terms of how we are designed to love autonomously, this is a necessary and critical part of her process. Internalizing the sights and smells of our beloved sets the stage for a sense of wholeness while living apart.

Children in the “practicing” stage are exchanging notions of symbiosis with mother for ones of possession. Instead of needing direct physical touch to feel connected, children practice feeling it at a distance. A child notices his mother leave to the kitchen while he is temporarily absorbed with his toys. His interest wanes and, instead of crying out for her to come comfort him, he calls out instead for her acknowledgment. “Juice?” “Sure, honey, I’ll get you some.” These interactions establish a sense of safety within a proximal distance. The more reliable these exchanges, the more distance opened up for exploration. In this way, the organic parameters of loving connection are found to reach far throughout the house and eventually throughout the neighborhood.

Sam and Phil are fully hatched as a couple. They are both enthralled with how important they are to each other and have begun regaling their friends with stories of their latest romantic triumphs. Their Instagram feeds contain large volumes of them holding, hugging, and having each other. Time apart is tolerable only insofar as they fill those empty hours with memories and plans for their next rendezvous.

Though their mutual world feels established, all is not always harmonious in the land of honeymoon. If Sam doesn’t hear from Phil for a day, he notices he starts to get cranky. Phil learns to oblige Sam’s moods by using a lot of soothing, reassuring tones when arriving after an extended absence. For his part, Phil gets anxious when Sam is given attention by others. Sam has learned to accommodate Phil’s jealousy by referring to Phil often when speaking to others. Phil relaxes each time he hears Sam describe himself as happily partnered. Some might judge Sam and Phil’s doting accommodations to each other’s insecurities as setting a poor precedent for their future. However, at the practicing stage, there can never be “too much” attention to sensitivity. It’s only closely wired couples whose love can span the distance as both partners venture a return to their autonomous lives.

Children in the “rapprochement” stage are confounded by two separate needs: the drive to individuate and the impulse to stay safe. Classically, this stage is depicted as a 2-year-old on her first day of preschool, clinging to her mother’s dress with one hand and reaching out toward the block room with the other. The job of the mother is to find grace as a selfless launchpad while the girl vacillates between hiding within the folds of mother’s dress and throwing her recklessly aside. The mother’s tolerance of this continual flip-flopping between extremes transmits to the child an ability to tolerate her own ambivalence.

The features of the fight give insight into the core rapprochement patterns established in their childhoods. This, in turn, gives insight into what’s in store for them as they attempt to resolve the current crisis.

When working with couples in crisis about their relationship, I’ll often ask them about their first serious fight with each other when they were just getting to know each other. As people recall the incidents, I listen for clues as to how they resolved the fight. Some scream and yell. Others are quick to kiss and make up. Some brood and punish indirectly for weeks before addressing the problem. Others discuss it ad infinitum until they slowly lose interest and move on.

The features of the fight give insight into the core rapprochement patterns established in their childhoods. This, in turn, gives insight into what’s in store for them as they attempt to resolve the current crisis. The need to shore up safety with a partner while also standing strong in one’s differences is a tense operation that doesn’t always resolve with the couple remaining intact. No matter the wedding vows, some partnerships can withstand an individual’s thrust toward self-growth, while others are shattered by the process. This period of rapprochement offers no promises, only an ability to tolerate the process.

Anyone who has witnessed a child progress through the early stages of attachment knows parenting is not for the faint of heart. Autistic merging, hatching, practicing, and rapprochement bring out the neediest and most demanding aspects of the human experience. Parents are asked not only to find a matching response to the child’s level of need but to express a reassurance that can somehow normalize the painful process of growing up. “It’s okay to be sad because I know you miss Mommy. I promise you, she’ll be right back.” With enough reassurance, children indeed arrive at the place where they can take comfort in imagining their mother’s goodness even while she is out for the day. “Object constancy” refers to a child’s capacity to feel the good qualities of their mother’s love inside of themselves.

As adults, we learn to return to and expand this childlike sense of object constancy to include:

There is no way to develop these abilities except by weathering the storms of disagreement, misattunement, and conflict with those we love. It’s never easy to be in opposition with the one you want to trust to take care of you. When tensions are high and the risk of separation appears imminent, some amount of “faking it ’til we make it” can be helpful.

“I can disagree deeply with you and know you will not leave me.”

“I can see your point of view, even come to agree with you, without losing my self-respect.”

“I trust us to negotiate solutions that will take care of both of us.”

Couples might reach toward such statements with the hope their very utterance will somehow make them true. Lo and behold, with enough patience, time, and reassurance, it can work. The good of the relationship is instilled within the hearts of each as a reliable constant. Arguments can come and go, leaving the underlying love undisturbed. With each round, a chance to grow up all over again.