Kay Redfield Jamison is a contemporary psychiatrist, educator, and author specializing in mood disorders. She is widely considered a leading authority on bipolar.

Born on June 22, 1946, Jamison received her bachelor's and master's degrees in clinical psychology from the University of California, Los Angeles (UCLA). She continued her studies at UCLA and received her PhD in 1975.

Jamison is well-known for her writings on mood disorders, particularly for writing about her own experience living with bipolar in the bestselling book, An Unquiet Mind: Memoir of Moods and Madness, published in 1995. She is also recognized as an authority on suicide and mental illness, and her book, Night Falls Fast, provides insight into the relationship between the two.

Jamison has received awards for her work a number of times and TIME magazine dubbed her a “hero of medicine” in 1997. Her awards include the American Foundation for Suicide Prevention Research Award in 1996, the Lifetime Achievement Award, Mental Health Association of Illinois in 2002, and the Silver Ribbon Award from the National Alliance for Research on Schizophrenia and Depression in 2007.

Jamison has lived with bipolar for as long as she can remember, though she was not formally diagnosed until she was 28. As a doctor and researcher living with bipolar, Jamison is able to study mood disorders while maintaining a clinical perspective. In addition, her unique, personal insight allows her to comprehend how bipolar affects the people she work with. When she disclosed her condition publicly in her memoir, An Unquiet Mind, her already well-established credibility deepened within the medical community.

Jamison has explored the link between bipolar and creativity in her research and writing, and she has demonstrated that that there is often a correlation between business success and mood disorders. She has conducted extensive research into both “normal” and “abnormal” moods, frequently arguing that the two are not easily separable. Jamison has also stressed the importance of employing psychotherapy in combination with medication to treat mood disorders.

Jamison’s approach is gaining popularity in that it de-stigmatizes mental health conditions and emphasizes the value some mood disorders can offer. Jamison has acknowledged the negative effects of living with bipolar, but she claims that she would not live without it, if given a choice. 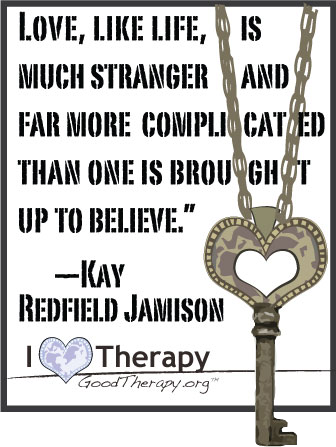