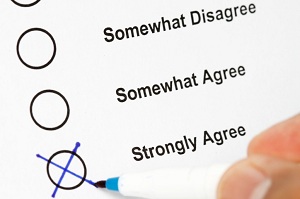 1. The Preschool Checklist – Used with children between 18 months and 5 years old.

2. The School-Aged Checklist – Used with children between 6 and 18 years old.

The checklist is used primarily to identify and understand problematic behavior. The child’s parent or other similar caregiver reads a number of statements and ranks them on a Likert scale of 0 to 2, with 0 being not true, 1 being somewhat true, and 2 being very true. There are 120 questions on the school-aged checklist and 100 questions on the preschool-aged scale. Questions are grouped according to behavioral categories such as internalizing behaviors and behavioral problems such as aggression. Statements to be rated by the person completing the checklist include statements such as, “Acts too young for his/her age.” There are similar assessments designed for teachers and the child to complete, so information can be compared from several sources and contexts.

Because the Child Behavior Checklist contains so many statements in so many categories, it serves as a global measure of problematic behaviors, and can aid in early intervention with learning disabilities, mental health problems, and similar issues. The clinician evaluates the checklist by tallying the score from all questions and then providing a table for each area of behavior. Each area can be assessed as normal, borderline, or clinical behavior. Borderline behaviors may warrant careful observation or early intervention to prevent future problems, while clinical behaviors may require treatment such as therapy or medication. When behaviors are classified as normal but the parent has ongoing problems with the child or views behavior as abnormal, the clinician may intervene with the parent and help the parent establish coping skills and reasonable expectations.