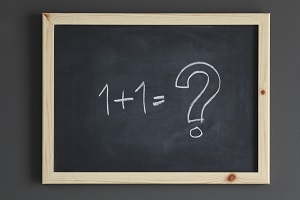 Acalculia is the inability to complete simple math problems.

Many people struggle with math, but acalculia is much more than just difficulty with algebra or calculus. People with acalculia are unable to perform even basic math operations, such as identifying the greater of two numbers or adding two numbers together. Acalculia is an acquired condition, not one a person is born with, and can occur at any time.

What Are the Symptoms of Acalculia?

People vary somewhat in the degree to which they are affected by acalculia, but the primary symptom is the inability to complete or understand basic math operations. When a person has previously been able to perform these operations and has lost that ability, he/she may be experiencing acalculia. Screening tests often ask people to perform several different math operations, and may also attempt to rule out other conditions by testing spatial reasoning, verbal skills, and similar skills that can affect the ability to do math.

Acalculia is usually caused by damage to areas of the brain directly related to mathematical reason, particularly the left parietal lobe of the angular gyrus. Blows to the head, brain injuries, and tumors can contribute to the development of acalculia. Acalculia is a symptom of a neurological condition called Gerstmann’s syndrome. Gertmann’s syndrome is rare, but can occur after a stroke or traumatic brain injury.

Is There Treatment for Acalculia?

There is no cure for either acalculia or Gerstmann’s syndrome. Instead, treatment focuses on occupational therapy and supportive care. Some people spontaneously recover from acalculia, and others notice that their symptoms diminish over time. However, some deficits typically remain for the rest of a person’s life.