Young Cancer Survivors May Be More Likely to Smoke 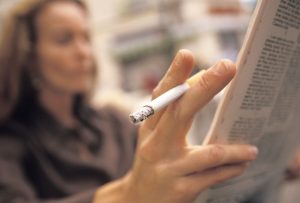 Cancer survivors who were diagnosed and treated in adolescence and young adulthood are more likely to smoke, according to a study published in Cancer.

Twenty-two percent of participants who had never been diagnosed with cancer smoked, compared to 33% of cancer survivors. Cancer survivors who smoked were also more likely to report poor health and to experience chronic illnesses such as cardiovascular disease, diabetes, and asthma.

Why Some Cancer Survivors Smoke

The study’s authors say a conversation with a health provider about smoking cessation may be the first step toward quitting. Yet nearly 40% of cancer survivors who smoked reported no conversations with health care providers about the issue in the previous year.

A Cancer Diagnosis May Not Stop Smoking

Although smoking is strongly correlated with cancer, it is common even for current cancer patients to continue smoking. A 2009 study published in the Journal of Oncology Practice surveyed a group of recently diagnosed cancer patients. Twenty percent reported being smokers at the time of diagnosis. Just 44% quit after being diagnosed, and 62% reported having conversations with health care providers about smoking cessation during cancer treatment.