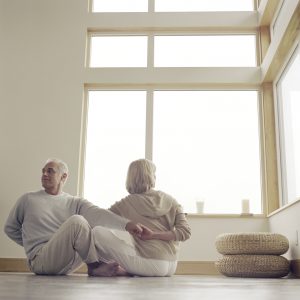 Both yoga and brain training games can reduce symptoms of pre-Alzheimer’s cognitive decline, but yoga may be more effective at improving spatial reasoning, according to a small study published in the Journal of Alzheimer’s Disease.

Alzheimer’s is the sixth-leading cause of death in the United States, with 1 in 3 seniors dying with Alzheimer’s or another dementia, according to the Alzheimer’s Association. One in nine people older than 65 has Alzheimer’s, costing the average caregiving family at least $5,000 per year.

Previous research has pointed to the value of exercise, meditation, and brain training to reduce symptoms of cognitive decline, particularly in the early stages of dementia.

For this study, researchers recruited 25 volunteers older than 55 to compare yoga therapy to brain training. Each participant reported some memory issues, such as forgetting names and losing things.

Both groups experienced improvements in remembering names and words. However, the yoga and meditation group saw greater improvements in visual-spatial memory. Functional magnetic resonance imaging (fMRI) brain scans showed increased neural activity in both groups, but only the yoga group had a statistically significant improvement.

The yoga group reported being better able to cope with stress, which suggests yoga might be a valuable tool for more than improving seniors’ quality of life.