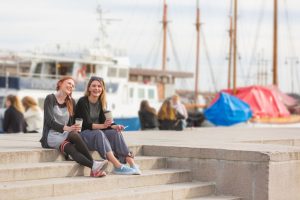 Since 2012, the World Happiness Report has ranked the happiness of 155 nations using measures of well-being. The 2017 report ranks Norway—which was fourth on the list last year—the happiest country on Earth. The countries in this year’s top 10 list have not changed since last year, though the order of nations has shifted.

How to Measure Happiness

Published by the Sustainable Development Solutions Network for the United Nations, the World Happiness Report uses data from the Gallup World Poll to assign each nation a happiness score. The score is the product of numerous factors that weigh on happiness, including safety, economic development, mental health, and national improvements in well-being.

According to the report, several key factors influence happiness: freedom, generosity, honesty, caring, income, health, and good governance. All four of the countries at the top of the list rank highly on these measures. The report highlights Norway’s oil production, suggesting intelligent and slow oil production—rather than oil-related wealth—plays a vital role in the nation’s happiness score. Thanks to this future-oriented approach, the report continues, Norway is largely protected from an economic boom-and-bust cycle that negatively impacts happiness in other nations.

The Happiest and Saddest Countries in the World

The United States ranked 14th in happiness among all nations, failing to break into the top 10 for another year. This year’s ranking marks a decline of one place since last year.

According to the new report, the 10 happiest nations this year, in descending order, are:

The countries ranking lowest on measures of happiness were in Africa and the Middle East, where war, poverty, and other social factors have eroded physical and mental health. The least happy countries, ranked in descending order of happiness, are: