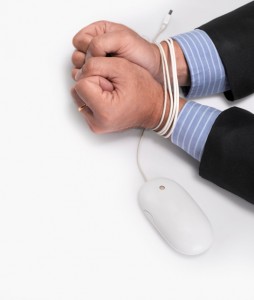 Since my last blog post several of you (all female) have logged onto my website and then called to express relief that I’m writing about something – women and pornography addiction – that many people and the popular media do not recognize as a real problem.  The Washington Times recently published results from a 2006 Internet Filter Review poll which found that 9.4 million women access adult websites each month, and 13 percent of them admit to accessing pornography at work.  And remember folks, this was four years ago!

Another sobering fact has surfaced as I continue to help women who have been sexually abused or assaulted.  The more pornography women view secretly, the more likely they are to be victims of non-consensual sex, which is often dubbed with the misleading moniker ‘date rape.’  As one young woman said to me recently, “It looked like a rip-roaring good time [for both participants] when I watched it online…”

Back in the 1980s, I worked with many people experiencing addiction to substances such as alcohol or cocaine. Most of these patients suffered serious withdrawal symptoms, to be sure. And they had to learn entirely new ways of getting through life without the thrill obtained from the drug. But no one needs or requires cocaine to survive, and most people were able to make the changes that kept them away from old relationships, social settings, and parties that encouraged drugging behavior.

Contrast this with addiction to pornography, particularly on the Internet, where most of us spend a great deal of time, whether at work or at home. All people who experience sex addiction have a particularly challenging time recovering because our culture is saturated with sexual images. Sexuality is used, both online and offline, to advertise everything from cars to soap to nail polish.

There’s no way to escape the fascination and preoccupation with sex that permeates our society. Sexually compulsive people are constantly bombarded and tempted with their drug of choice: the endorphins that flood our bodies when we are sexually aroused.

My colleague Rob Weiss explains this phenomenon: “If a person masturbates to pornography on a regular basis they will actually get attached to having sex with inanimate images or objects rather than real people. Soon they will actually hunger for idealized relationships with images rather than intimate human relationships, creating over time what we call intimacy anorexia. Healthy sex is always relational. Object sex of this kind skews our arousal template, creating a particularly intense ‘buzz’ that can never offer the full satiation and depth of connection that true intimacy can offer.”