Will Hurricane Sandy Drive People to the Altar? 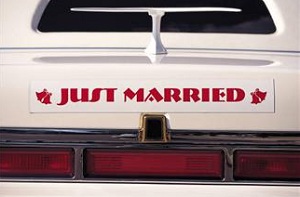 According to a recent article, Hurricane Sandy may cause people to get even more serious about their serious relationships. Research has shown that marriage rates spike after a natural disaster. And about nine months after major power outages, hospitals tend to be inundated with new babies.

Sound like a tall tale? Well, psychologists believe that attachment theory is what creates this unique dynamic. When a major disaster hits, people reevaluate their priorities. And one of the major priorities in a person’s life is his or her closest relationship. According to a Journal of Family Psychology study from 2002, birth rates and marriages increased dramatically after Hurricane Hugo hit in 1990. However, upon further investigation, researchers also discovered that divorce rates increased as well. The authors of the study surmised that people who had been faced with a life-and-death scenario became motivated “to take significant action in their close relationships that altered their life course.”

Another research study revealed a sharp increase in births in the year following the bombing of the Alfred P. Murrah Federal Building in Oklahoma City. In contrast to that study, a 2010 study from The Journal of Population Economics examined data from 47 countries and found that advisories predicting severe weather and potential disasters caused birth rates to decrease. In either case, it appears that when people are faced with a natural disaster or life-threatening situation, they reexamine major decisions in their lives. Couples contemplating having children may choose to not put that decision off any longer for fear of an uncertain future. Partners considering marriage may choose to tie the knot sooner rather than later. And people who are unsure of their commitment to their mates may make a decision as to whether to stay in their relationship. In sum, evidence clearly shows that major catastrophes have a significant impact on important life decisions; the direction of that impact is still unclear, however.