Why Feeling Anger and Hate Is Good 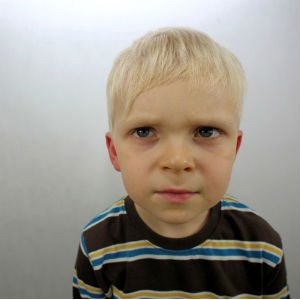 “I hate you!” 4-year-old Carly screams at her mother. Some moms might react by grabbing their daughter and spanking her on the bottom, or screaming, “You are a bad girl!” or telling her, “That’s a bad word, we don’t say things like that,” or starting to cry and admonishing, “You hurt Mommy’s feelings.” There are many ways children learn to think of their angry or hateful feelings as bad even though anger and hate are normal human feelings. Too frequently, families don’t differentiate between expressing these feelings through words and acting on them. When families succeed in outlawing feelings of anger and hate and don’t teach their children appropriate ways of expressing their feelings, they limit the child’s ability to be aware that he or she has these feelings and to use them successfully. These limitations seriously interfere with the ability to become a person who can navigate life and relationships with a full range of feelings and self states.

Several years ago, I received a call from Frank, who made an appointment. In our first session, he was clear that he wasn’t sure he needed therapy, but his wife thought he should see a therapist because he seemed so unhappy with everything. He told me that he thought his wife was probably right, that he wasn’t very happy. “But I don’t think I’m depressed,” he said. “You know, I just do my life. I share responsibility for my 10-year-old son, who I love. I have a job that helps to pay the bills, but I don’t care much about it one way or the other. I’ve been married for 14 years and my relationship is OK, even though my wife keeps complaining that I don’t seem happy. She can be a nag, but that’s fine—I’m used to it. I’m OK.”

I commiserated with Frank that it seemed his wife had sent him to therapy and that he didn’t really feel that it was something he wanted or needed. He responded, “That’s so true, but I guess I don’t really know what I want or need. My wife always seems to know what I should do more than I do. So I’ll give it a try.”

Frank and I began our work, and since Frank didn’t have any specific complaints, I thought it would be useful for him to tell me his life story.

Frank described his childhood as “the usual—no real problems.” In one session, he recalled, “My mother taught me to be thoughtful about people. She was anxious and always worried about what other people thought. It was most important that I treat her with utmost respect. I always did what she said; I was very aware of not wanting her to feel embarrassed by my behavior.” In another session, he spoke of his mother: “She could get very hurt if I disobeyed or said no in any way. I remember when I was 6 or 7, I wanted so badly to go to my friend’s house to play with these action figures he just got. She wouldn’t let me go because my father was away on business and she didn’t want to be alone. I think I said something like, ‘Please, it’s not fair. It’s only for a few hours.’ She got very upset with me and started crying, ‘How could you be so mean to me and hurt me like this? How dare you say I’m not fair?’ I felt terrible. I couldn’t stand to see her hurt.”

Frank’s father, a successful litigator, was always involved in his work. Frank understood that his job was to be there for his mother and keep her emotionally comfortable. Any attempt to protest or “do his own thing” would be met with the mother’s hurt and Frank’s remorse. He learned early how to be a “good son.” When I asked Frank if he ever felt angry with his mother, he looked startled. “Why would I be angry at her?” he said. “I was the bad one. I hurt her. Besides, I could never feel angry with her. She never said so, but it wasn’t allowed. I think it would have destroyed her.”

Frank’s demeanor in our sessions was usually slouched over, talking quietly, mostly in a matter-of-fact way. When he spoke about high school, he perked up and began to describe doing well academically and feeling good about it. But then those feelings disappeared as he explained, “In my junior year I was thinking about going away to college and started to talk to my parents about it. My mother said I would be better off going to college at home and my dad agreed. I remember him saying that he appreciated my being at home with his being away for business so much and that it would be good for me to live at home and save the family some money.” Frank looked sad and said, “You know, maybe I did get kind of depressed then. I know I didn’t have a choice. It seemed that was just the way things were, not something to have feelings about. I never applied to schools away from home. I lived at home all through college but got my own apartment when I graduated. My parents found one for me in the neighborhood where they lived.”

I asked Frank, “What do you mean when you say you had no choice?” He looked perplexed and seemed to have trouble responding. “I don’t know. It wasn’t something that I would have thought about once they said no. They said no and that was that. I suppose I never gave it a second thought.”

“What do you imagine would have happened if you did give it a second thought?” I asked.

“It’s not conceivable,” he said.

“Just try to let yourself imagine and see what you think of.”

“It’s OK not to know. But I really would like you to try.”

“What do you imagine you would have cried about?”

“Hmm. I would have been sad that I couldn’t go away to college.”

“Why do you think you would have been sad?”

“I don’t know. Maybe I would have liked to go away and was unhappy that I couldn’t.”

“I remember you told me about wanting to go with your friend when you were 6 or so and you told your mother that it wasn’t fair that you couldn’t. Do you think this could have been a similar feeling?”

Frank began to cry softly, “Oh yes, yes, that’s it. I couldn’t go with my friend, I couldn’t go away to college, and I couldn’t do a lot of things. It wasn’t fair.” Frank put his head in his hands, and his crying got louder.

“It’s very sad. You learned not to protest and to accept the life your parents prescribed for you,” I said.

After this session, Frank and I began to look at this pattern of accepting what was put in front of him, choosing what was pleasing for others and opting for paths that were least likely to create conflict or stir up feelings of anger.

We are currently talking about Frank’s relationship with his wife and son. He is more curious about his wife’s description that he’s “always unhappy” and is considering what he could be unhappy about. He recognizes that feelings have been accumulating about his life that he has never been free to feel or express. This worries Frank. “What if I know what I want or think or feel? What happens if I start to get angry at the people I love? Oh, my god! What if I even hate them?” These are frightening thoughts, and we are working on Frank becoming more comfortable bringing more of himself into his relationships. Frank had an “a-ha!” moment when it occurred to him that maybe his son doesn’t listen to him because he can’t say no to him. Frank told me with great surprise, “I’ve been afraid to get angry with him, so I just say yes, and I haven’t been tuned into myself. You know, I can see now—I do feel angry!”

Frank is scared but also excited about the possibilities of developing his voice and getting comfortable with his feelings. We have much more talking to do, and we will take it slowly. Frank will be anxious as he grows and develops and tests his new thoughts and feelings in the world. But each success in voicing his authentic self will make his next attempt to be the person he is becoming feel a little less frightening. With continued work, Frank can get comfortable enough with himself in the world.

Frank’s story is not unique. Many children grow up in families where they learn, consciously and/or unconsciously, that feelings of anger and hate are bad. They may be unaware that they are fighting within themselves not to feel these feelings. As they mature, they are handicapped. They can’t know themselves or be themselves or use these feelings to help make choices. For example, they won’t be clear that they are being treated badly, or that it’s OK to compete to get what they want, or, like Frank, that it’s necessary to say “no” to help a child learn to accept “no” and limits.

Children who grow up believing that anger and hate are bad usually believe that if they have these feelings they will DO something bad or act in a hateful or rageful manner. But feelings do not have to be acted upon, or can be acted upon in appropriate and nondestructive ways. If we don’t have a full range of feelings available to us, we are at risk of not knowing what we want and who we are—and of having limited lives and relationships.

Editor’s note: Names in the preceding narrative were changed to protect privacy.