When It Comes to Dating, Money Increasingly Matters 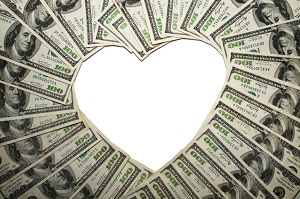 Tying love to income or financial savvy has long been a taboo topic. People who marry for money are derided as shallow or gold diggers, but responsible money management may be just as important in a relationship as communication or mutual respect. Married couples consistently report that money and financial issues are a source of conflict, and at least one study found that frequent arguments about finances are a significant predictor of divorce. Increasingly, it seems, singles are factoring money considerations into their dating lives. Questions about credit and long-term savings seem well on their way to becoming as commonplace as discussions of favorite books and travel adventures.

The Importance of Good Credit

When credit is tight and lenders are more hesitant to dole out loans, a person’s credit score may become a relationship deal-breaker. If your partner has lousy credit, you could find yourselves struggling to buy a house or drowning in a mountain of credit-card debt. A survey of 1,000 people by FreeCreditScore.com found that 20% of men and 30% of women wouldn’t consider marrying someone with bad credit. The number of singles who consider credit scores is much higher. Fifty-seven percent of men and 75% of women say they consider a person’s credit history before deciding to commit to a relationship.

Money-management skills, such as the ability to live within your means, make savvy investments, and get the most for your dollar, can play a key role in a couple’s lifestyle. Couples with healthy money-management styles can look forward to fewer fights and a more comfortable budget. In one survey, women ranked financial skills as more important or as important as attractiveness, sex, and career goals. Men weren’t far behind women, ranking financial skills as slightly less important than sex, almost as important as attractiveness, and significantly more important than career goals.

Why is it that women seem more interested in finances than men? The potential explanations are as diverse as women themselves, but it may have something to do with gender roles. Historically—and to this day in some places and cultures—women are raised to believe that a man should make more money than a woman and that a woman should stay home with the children. Considering a man’s financial status enables women to evaluate the possibility of such an arrangement. But concern about financial issues isn’t just for traditionalists. Women still make about 80 cents for every dollar a man makes. Perhaps women want to see that they and their partners will be able to support themselves on two incomes. Financial mismanagement could also indicate immaturity and recklessness.

So when is the right time to talk about money? Many couples discuss money in their first year of a relationship, but it’s not uncommon for it to come up in the first few dates. Some people may start with broad, general topics to get an idea of their date’s stance on money matters, then try to get more specific information as the relationship moves forward. Others may feel so strongly about money matters that they push the issue on the first date as a means of filtering potential mates.

If you’ve made some money mistakes in your past, you’ll need to come clean about them. Not everyone with bad credit is financially irresponsible; a medical bill or identity theft can quickly trash your credit. But whatever the reason for your money problems, to be an attractive romantic partner, you’ll need to demonstrate that you’re working toward resolving them.