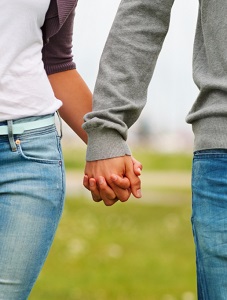 The pages of women’s magazines are filled with articles offering methods for encouraging men to propose marriage, and entire websites are dedicated to increasing a person’s marry-ability. Both men and women can be hesitant about marriage, and when romantic partners have different opinions of marriage, the conflict can be challenging to resolve.

It is possible, however, to have a committed and loving relationship without marriage, and some people who are uncomfortable with marriage ultimately change their minds. A disagreement about marriage doesn’t have to end your relationship, particularly if you both are committed to the relationship.

If you’re itching to get married and your partner resists, it’s easy to assume there’s a problem with the relationship or that your partner isn’t fully committed to you. These issues could indicate that it’s time to consider moving on. But there are myriad other reasons people are uncomfortable with marriage that have nothing to do with the relationship. Cohabitation is an increasingly popular option; one 2013 study found that 32% of couples chose long-term cohabitation over marriage. Some reasons your partner might be uninterested in marriage include:

The Role of Communication

As with so many other relationship issues, open and honest communication is the key to resolving disputes about marriage. You might assume you know your partner’s reason for avoiding marriage, but you don’t really know until you ask. Hearing that your partner is concerned that marriage might change the relationship will likely feel a lot better than simply assuming your partner doesn’t want to get married because he or she doesn’t love you.

And for partners who want to get married, explaining clearly and logically why you want to get married can make a big difference. The benefits of marriage include automatic paternal legitimation for children, significant tax benefits, and shared insurance. Pointing these out to your partner could help, but addressing his or her concerns is equally important. You might be able to come to an agreement about when you’ll reevaluate the marriage question and how you’ll address insecurities and relationship logistics in the meantime.

While you might feel hurt if your partner doesn’t want to marry you, it’s important to consider that marriage might mean something completely different to your partner. Consequently, it’s wise to focus on other ways to get your needs met rather than making marriage a deal-breaker. If, however, you can’t stay in a relationship that doesn’t end in marriage, trying to push the relationship toward marriage can cause it to fall apart. It might be better to end things now.

If you and your partner agree to live together without getting married, you’ll have the freedom to pick and choose which marriage benefits you want to take advantage of and which you want to avoid altogether. A simple contract, for example, can outline who owns what property and how it will be divided if you split up. And if you have a child together, you’ll need to ensure that both parents are listed on the birth certificate or that the nonbiological parent adopts the child. You won’t be able to get tax benefits, but you can still combine your lives in a way that works for both of you.