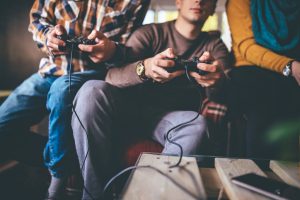 Video games can support sexist attitudes by teaching sexist ideas and encouraging players to “practice” these ideas, according to a study published in the journal Frontiers in Psychology. The study also found a link between religious sentiments and sexism.

Video Games and Sexism: What Is the Link?

On average, participants spent two hours a day playing video games and three hours a day watching television. Though researchers did not evaluate sexist content in video games, the study cites research suggesting more than 80% of female video game characters are sexualized, barely dressed, or portrayed as beautiful. Many female characters fit all three of these categories.

Researchers asked participants if they agreed that “a woman is made mainly for making and raising children.” Participants who spent more time on video game play were significantly more likely to endorse this statement. Religious attitudes also increased the popularity of sexist attitudes.

Though researchers controlled for gender and socioeconomic status, when viewed separately, men of a lower socioeconomic status were more likely to display sexist attitudes. The study’s authors highlight the role of sexism in games such as Grand Theft Auto, arguing that these games expose players to sexist ideology. They also provide opportunities to practice and be rewarded for sexist attitudes.

Other Research on the Effects of Video Games