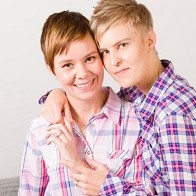 With gay rights making big advances, more gay couples are coming forth to dismantle the stereotype that their relationships are superficial and brief. The truth is they can be just as committed and loving as heterosexual ones. They can also have the same types of conflict: family, finances, household chores, parenting, and so on. Any two people trying to live together are going to run into disagreements. There are a few things, however, that are unique to same-sex couples.

One of the most difficult aspects for same-sex couples can be keeping a boundary between lovers and friends. In a heterosexual relationship, the boundaries are clearly marked by sex: A man may spend a “night out with the boys” without engendering feelings of insecurity in his partner. Likewise, a woman could go to a bridal shower with no concerns on the part of her husband. Should he want to have dinner with an ex-girlfriend, however, or if her workout trainer is a man, there may be some tension.

In gay relationships, there is no such division—most friends and exes are of the same sex as the couple. They also tend to share the same friendship circle. It would be weird, therefore, if one half of the couple socialized with their friends while the other stayed home. In fact, exes are often part of the friendship circle, making it even more awkward.

There is no one way to handle this situation, but as it is healthy for every couple to spend some time apart, it would be wise to agree to some rules at the beginning of the relationship. For example, if one partner was friends with “Kelly” long before the couple got together, it might be agreed that occasional get-togethers with just the two of them would be OK. Or maybe the rule is no attending parties alone if an ex is going to be there. Better still, discuss underlying fears and where they are coming from long before the situation arises. Remember, though, that it is not useful to get angry or make light of your partner’s fears. Defensiveness tends to exacerbate the fear. Make sure they feel heard, and that you respect what they are saying before you start reassuring. It goes without saying—but I’m going to say it anyway—you shouldn’t add fuel to the fire by staying out until early morning or talking with your friend several times a day.

Another issue unique to same-sex couples is that each partner may be at a different level of comfort with being “out.” One partner may be comfortable with holding hands or kissing in public. The other may not be there yet, or may have more fears about negative repercussions. In this scenario, it is good to remember that each person is entitled to develop in his/her own way. Pushing your partner to be at your level is unfair and insensitive. If it is a major area of conflict, it might be helpful to see a therapist to gain understanding of each other’s viewpoints and find a place of compromise.

The above issue can be particularly tough when it comes to family. Many stories have been written about in-law troubles, but in same-sex couples there is an additional layer of conflict. It may be that one partner is not yet out to his or her parents, which puts the other in an awkward position. Or perhaps they are out, but the parents are not accepting. Again, very uncomfortable. Does she go to dinner there alone? Does he refuse to see his family if they don’t accept his partner? Because each person, couple, and situation is unique, the answers have to be worked out by each individual couple. However, there are better ways to address this than to make your partner choose between his/her parents and you.

While it is hard not to feel hurt when your partner seems to be taking his or her parents’ side, try to remember that your boyfriend or girlfriend probably has imperfect parents just like everyone else and that there are issues leftover from childhood. Also, everyone feels the family bond (or lack thereof) differently. I would say that attitude is a big factor here: Is your partner willing to admit that there may need to be some changes made, or does he or she refuse to even discuss the matter? Does he or she acknowledge your feelings, or does he or she get defensive? Does he or she rationalize and say, “We only have to see them twice a year”? If you really feel you are being left out in the cold, there may be more going wrong in the relationship than just in-laws and you might have to take a closer look at the whole picture.

When it comes to relationships, a certain amount of conflict is normal. How you handle it, however, is what makes the difference between a healthy, lasting relationship and one that ends bitterly. Being aware of potential issues, and talking them over before they get too heated, is one way to keep trouble to a minimum.