No Room to Dance: The Tyranny of ‘Perfection’ in Restrictive Eating Issues 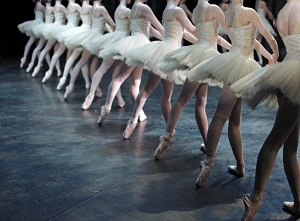 The allure of beauty is intoxicating and dangerous—perhaps most dangerous for women in America. The United States fosters more so-called eating disorders than anywhere else in the world, with women affected 10 times more often than men.

Has the American dream betrayed us? There’s a promise of love and happiness for any young woman willing and able to embody the next popular image of beauty. It’s a story with an unhappy ending, but we pretend we don’t know that. From supermarkets to billboards to music and film, we are bombarded with unrealistic, grossly underweight, even life-threatening prescriptions for what it means to be a beautiful woman. Sadly, for the most part, we buy into them. Media images and ideals infiltrate our families, our peer groups, our intimate relationships; a great deal of internal strength is required to combat these images.

The movie Black Swan, directed by Darren Aronofsky and starring Natalie Portman, unveils the very dark side of pursuing perfection and beauty. Portman plays Nina, a young, talented dancer in a prestigious New York City ballet company. She is competing for a highly sought-after part. Nina has mastered her ability to play the white swan, symbolized by innocence and perfection. Thomas, the director, embodies a seductive masculine voice, evaluating and guiding Nina’s performance and progress. He pushes Nina beyond her limitations. He insists that the dancer who plays the white swan must also be the black swan, which is more sensual and deceptive. Therefore, Nina must undergo a radical transformation of character to “fit the part.” In doing so, she becomes the “Swan Queen.” Black Swan is a tale of supreme glamor and tragic corruption.

Thomas’ career is marked by moving from one “special” dancer (each of whom he calls “princess”) to the next, discarding each one the very moment she becomes yesterday’s news. Winona Ryder plays Nina’s predecessor (yesterday’s news), Beth, who is forced to retire after having become too “old” for the part. (Notably, the beautiful Ryder is only 10 years Portman’s senior!) Shortly after Beth’s retirement, she is tragically hit by a car, a suspected suicide. In Beth, Nina recognizes something of her own fate. And yet she ignores it. She is blinded by the thrill of her more immediate aspiration. In the performance of “Swan Lake,” she achieves her moment of beauty and perfection, but she pays for it with her sanity and her life.

Nina’s tragedy is that she never has a chance to develop as a person. She lives for one moment, but never lives a life. She exists only for the sake of others—but never herself. Nina’s journey parallels the tragic tale of so many women with restrictive eating issues. Dying for beauty or perfection involves surrendering one’s true self in exchange for an ideal. The issue usually originates with a basic deprivation of respect and consideration for the individual.

Nina’s personal desires and feelings are of no importance to Thomas, the director who articulates and orchestrates all that she must become. Furthermore, her individuality goes unrecognized by her mother, who treats her as an extension of herself. Nina’s mom raised her to have the successful dance career she wished she’d had for herself. But when Nina begins to succeed, her mother attempts to sabotage that success.

How does one understand such a mixed message? In becoming more successful than her mother, Nina and her mother are no longer merged or twinned. As separate, the “unsuccessful” mom finds herself in a position to envy the “successful” daughter. As an unmarried woman who might be considered past her prime, Nina’s mom’s hope for happiness is pinned narrowly on the success of her daughter. Both Nina and her mother are victims of a cultural intoxication with a particular sort of beauty—a sort that betrays the self and proves bereft of real happiness.