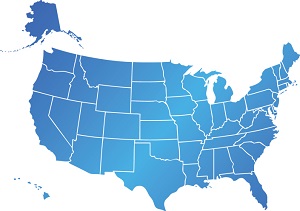 Anyone who has fantasized about a gorgeous beach house or mountain getaway knows that where you live can affect how happy you are. Researchers at the Vermont Complex Systems Center argue that you can learn a lot about how location affects happiness from social networking.

The researchers have been reading a lot of Twitter postings lately—10 million, to be exact. And using data they’ve gleaned from these tweets, they’ve announced the happiest and saddest states. Topping the list of happiest states in the country are Hawaii, Maine, Utah, Nevada, and Vermont. The saddest states, according to the study, are Louisiana, Mississippi, Georgia, Maryland, and Delaware.

Study Methodology
Twitter postings are notoriously convoluted and may contain hash tags, inside jokes, and hidden meanings. So how did researchers determine which tweets were happy and which weren’t? Based on research indicating specific words that were correlated with happiness and sadness, researchers coded the content of each tweet, then mapped the posting onto its geographic location.

Profanity and words such as ugly, smoke, hate, and lied were correlated with unhappiness. But words such as rainbow, love, beauty, and hope generally indicated a happier poster. Researchers found a much higher prevalence of negative words in the unhappiest states, while residents in happy states tended to use more words correlated with a good mood.

The study also ranked cities according to happiness. The unhappiest cities in America were deemed to be Beaumont, Texas, and Albany, Georgia. The happiest cities were Napa, California, and Longmont, Colorado.

Why So Unhappy?
The researchers note that the study’s results correlate with income and obesity. Georgia, Louisiana, and other “unhappy” states tend to be more impoverished. Residents may have less access to healthy food and are more likely to be obese. But people living in Hawaii tend to be wealthier with fewer health problems. Four of the states on the unhappy list—Georgia, Maryland, Louisiana, and Mississippi—are also among the 10 states with the highest divorce rates.

Conversely, many of the states listed as happy are popular vacation destinations. People posting ecstatic Twitter updates might simply be excited about a honeymoon or summer trip. States in the Northeast and western United States generally rank higher on an assortment of quality-of-life measures, so the happiness rankings may be the natural outgrowth of a better or more relaxing life.

Different Ways of Expressing Happiness
Twitter postings can’t serve as definitive proof of happiness or misery because they are heavily influenced by cultural norms, social groups, and figures of speech. Some critics of the study have argued that people may simply express themselves differently in different geographic locations. Just as many southerners have a recognizable drawl, they might also have speech patterns that, to the uninitiated or unfamiliar, could be confused with signs of misery.

It’s also possible that Twitter postings don’t accurately convey feelings. Cultural norms in one part of the country might hold people back from openly expressing misery, while expressions of frustration might be viewed as ways to remain happy and avoid depression in another part.