Traumatic Events in the News & Our Collective Apathy 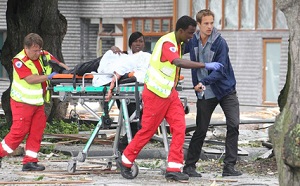 I didn’t cry when I saw the panic stricken families of the 69 children shot dead on Utoya Island in Norway last weekend. I didn’t linger longer than usual when they showed the bombing in the center of Oslo that killed 8 people. The sight of shattered windows and blown up cars provided no shock and awe to me. My attention was only momentarily captured when a Virginia Tech student killed 32 students before taking his life in the spring of 2007. And in March of 2005, when a student in Red Lake, Minnesota, killed his grandparents, several classmates then himself, it hardly distracted me from my daily responsibilities of raising two children.

But Columbine was different. On April 20, 1999, when two teens wearing long trench coats carried out their plot to kill their classmates and teachers, I was mesmerized. I had been camping all day and returned home late in the afternoon to find the television plastered with images of the horrific scene on every network. I ushered my very young children into another room and spent hours watching the drama unfold. It was just one year earlier when I had been blindsided by similar events. A 15 year old boy had shot 24 people at his high school in Springfield, Oregon after he had killed both of his parents. And Jonesboro, Arkansas was still a media hotspot because of that city’s own similar tragedy just two months before Springfield. As a matter of fact, the five or six years following the Oklahoma City bombing on April 19, 1995, a trauma that grabbed the attention and hearts of the nation, seemed to be riddled with unspeakable violence, finally culminating in the 9/11 attacks.

But something has happened to our nation since those days. We have developed a collective apathy. We no longer shed tears for the dead, like I did when I saw a firefighter carrying a wounded toddler out of the rubble of the Alfred P. Murrah Federal Building. We seem to be more enraged about who just got voted off American Idol than we are by a video of panic stricken dying teens. My own kids, who do not even remember half of those gripping events, are exposed to violence, death and victimization on video games, cartoons and every internet outlet available. Heck, they have become experts at indifference because they can access callousness from any location via their smartphones and iPads. I know that as a parent, it is my job to teach them empathy. I know that regardless of what they learn on Family Guy or YouTube, that it is my responsibility to monitor the flow of information into our home and their lives. But let’s be real, this is now, not then. I have a hard enough time keeping my own inbox clean and text messages current. I, like many parents, can hardly police every second of my children’s lives too.

And yet, we wonder why bullying is on the rise. We recoil in self-righteousness when our neighbor’s son gets arrested for bringing a weapon to school, while our own teen is killing people on his Xbox with a stranger in another state. We watch shows like Law & Order, but are disturbed when we hear our kids toss the word ‘rape’ around. Maybe it bothers me because I want my children to be sympathetic, empathetic, feeling, compassionate human beings. I don’t want them plagued with worry over the pain and suffering that exists in our world. But I want them to at least flinch when they see a despicable act.

I want my children to be motivated to act as I was when I poured my heart out to the victims of the Oklahoma City bombing. My words flowed faster than my tears in that anonymous letter. I know we live in a faster, different and much more violent world today. But I truly believe that no matter how small our computers get, our hearts are still incredibly big. I want my kids to know that it is okay to be moved by tragedy. I want them to tear up when they hear of a whole city being wiped out by a tornado. I want them to pack up the toys they no longer use to send to the homeless victims of the tsunami. But at this point, I would be happy if they felt anything at all, other than their cell phones vibrating.