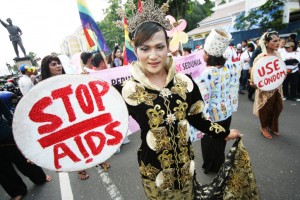 As many as one in 12,000 women designated male at birth seek medical treatment to affirm their female gender, according to one recent study from the Netherlands. This transition can be both difficult and dangerous, as transgender women face numerous challenges throughout their lives, including inadequate or nonexistent medical care, stigmatization, and a high exposure to violence.

Twelve percent of trans youth report being sexually assaulted at school, with 15% of trans people facing assault while in jail or police custody. Among African-American trans people, that figure rises to 32%. Additionally, one survey found that 50% percent of those surveyed had been assaulted by a partner after coming out as trans.

Proper medical care, administered by knowledgeable and accepting professionals, is vital for trans people, especially when they are victims of violence. But a new World Health Organization report suggests that trans women face both inadequate health care and unusually high rates of HIV.

Health Care Options for Trans Women Not Meeting Their Needs

Since just 15 countries offer scientific data on HIV rates in the trans community, researchers attempting to gather data on health status among trans individuals were not able to gather data from all countries. Within those countries that reported statistics, the HIV rate among trans women is 19%.

No country in Eastern Europe or Africa provides such data, so HIV rates could be even higher outside of the 15 countries that offer HIV statistics. JoAnne Keatley, one of the authors of the WHO study, told NPR earlier this week that one meta-analysis found that trans women are 49 times more likely to have HIV than the general population.

The WHO report attributes these high rates of HIV infection on discrimination against trans populations, pointing out that “transgender people are often socially, economically, politically, and legally marginalized.” Few governments, Keatley told NPR, have passed legislation to protect trans people, and this lack of protection results in further marginalization.

Trans women may face violence and stigma simply for being who they are. Some are uncomfortable sharing their identities with doctors, and others avoid medical care because of previous negative experiences. A 2011 survey found that 24% of transgender people reported treatment inequality when seeking medical care.

Some states, New York among them, have begun to work to resolve this discrimination and provide increased protections and care for trans people. But sensitivity among doctors is still an area of concern, and a number of medical organizations have lobbied doctors to educate themselves about the needs of transgender individuals they treat. The American College of Obstetricians and Gynecologists (ACOG) highlights the need to create a welcoming environment, use inclusive language, and adopt a non-discrimination policy.