The Thin Line Between Diet and Eating Disorder 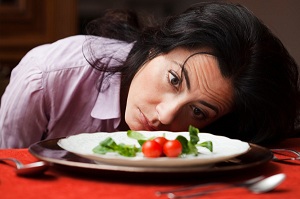 Let’s face it, hardly anybody has a completely healthy relationship with food. Unfortunately for our society, disordered eating is the norm, whether it’s crash dieting, stress eating, or whatever else you want to call it. Because of this, it can be really hard for someone in danger of developing an eating disorder to recognize the slippery slope of the diet they’re on until they’re well on their way down. Clearly, not everyone who diets develops an eating disorder, but research does show that 35% of occasional dieters become pathological dieters, and as many as 25% of those diets will progress into full-blown eating disorders. So when does dieting become dangerous? What’s the difference between a diet and an eating disorder? Sometimes the line is an awfully thin one.

A typical diet begins with a longing to lose weight. Often, this longing is coupled with a genuine wish to improve overall health and nutrition. A typical diet ends when either the weight goal is achieved or the dieter stops due to some inadequacy of the regime—too many restrictions, too few calories, etc. An eating disorder often begins the same way—with a longing to lose weight. In fact, 80% to 90% of eating disorders begin with a diet … but that diet never ends. The transition from diet to disorder has no one purpose and no one cause.

While diets are about food and weight, eating disorders become much, much more than that. Food and weight become all-powerful, and people with eating disorders use both in an attempt to better their lives (by gaining a sense of control, numbing painful emotions, earning approval or acceptance, etc.). Eating disorders do not end when a weight goal is reached because a new one will always be set. One begins to believe and behave as if “the perfect body” is attainable, and will strive for this allusion no matter what. Over time, a person’s self-esteem and general outlook on life become dependent on weight and appearance. At that point, nothing else matters.

A common danger in assessment by a professional not familiar with eating disorders is that too much emphasis is placed on a person’s weight and other physical symptoms. While these factors are often good indicators of a problem, they are not always “alarming enough,” if present at all. Equally important, if not more important, are the symptoms that cannot be seen—the symptoms in the mind. The psychological disturbances that both cause and perpetuate eating disorders are often the most difficult to treat. It’s important to understand that although someone does not fit all the criteria for a specific eating disorder, such as anorexia, bulimia, or compulsive overeating, they can still be doing a great deal of damage to their body, mind, and soul.

In a world where not being on a diet is abnormal, and restraint is a sought-after skill, being healthy and loving your body can almost feel awkward. I’m reminded of a scene in the movie Mean Girls when new girl Cady enters public school for the first time after growing up in Africa for 16 years. While her new friends nitpick their appearances in the mirror, Cady muses to herself, “I used to think there was just fat and skinny. Apparently, there’s a lot of things that can be wrong with your body.” It’s an unfortunate message, but a true one. The body-confident girls and guys are few and far between.

What about you? Are you balancing the thin line between diet and disorder? Do you feel preoccupied with food, weight, calories, or a desire to be thinner? Do you feel the need to rigidly control your food intake or exercise schedule?  Don’t let these obsessions rob you of another minute, day, or year of your life. Remember, you’re most beautiful when you are confident and accepting of yourself, just as you are. Then and only then will you be able to make positive, lasting changes in your life.

© Copyright 2011 by By Josie Tuttle, MA. All Rights Reserved. Permission to publish granted to GoodTherapy.org.