Partners of Unemployed People: Take Care of Yourself 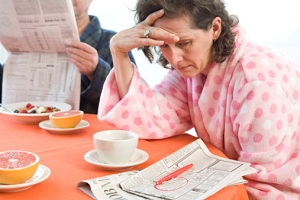 Unemployment is a downright monster. Most often, we see a lot of support for the unemployed person who is building his or her resume, interviewing, networking, staying busy, and being positive. I certainly hope and pray that our economy improves soon and each unemployed person finds work that is fulfilling in both meaning and income.

But how about support for the partners of unemployed people?

Ms. Y (not her real name) came in the other day and said, “My husband has been unemployed for over two years. Over two years. Over—two—years! I say it, dumbfounded, because at some point every day, I realize that I can’t believe how long it’s been. First it was an industry crisis. Then came his depression. Then there was his second wind, his revival. Then the revival turned into stagnation again. There were a number of short-term freelance gigs. There were rejections, interviews, and even jobs-in-hand that folded at the last minute  thanks to the tanking economy.

“During every rise and fall of this god-forsaken unemployment phase, I have been there to support my partner every step of the way. I’m exhausted. I’m tired of being the sole breadwinner. I’m especially tired of all those people who tell me what they think about my husband’s lack-of-work situation. During these years, I can’t tell you how many times I’ve been at some function where after a few drinks someone said to me, ‘I feel so bad for your partner. Your partner really needs support. Be patient, be supportive.’

“I think to myself, ‘Me, be patient? Me, be supportive? When haven’t I been?!’ I want to jump out of my skin and slap that person silly. Instead, I stuff my pride, and in my most polite tone, I tell the preacher-man to stick it. I want to hear what they have to say after they’ve supported their unemployed partner for over two years. I doubt it’ll be the same thing, I swear. Jerk.”

My heart goes out to Ms. Y and people like her. It is tough to be unemployed, but it is equally tough to be the partner watching and supporting the unemployed person. It is a terribly helpless position. Some have become involuntary breadwinners, straining to care for everyone and everything with one lone paycheck. All are forced to be passengers on the emotional roller coaster ride of a loved one’s bout with unemployment.

Some are the only people their unemployed partners will talk to about their suffering. Often, their emotional needs involuntarily get thrown aside because of the attitude that “unemployment isn’t happening to you, it’s happening to the unemployed.” Both the unemployed and partners of unemployed vacillate on the spectrum between the hope for the day of the “Great News” (“I start a new, real job on Monday and can help pay the bills now!”) and fear that their savings will be sucked dry and they’ll be forced to live in a shelter—or worse, their parents’ house.

I say unto you, dear partners: It is time.

Partners, it is indeed time to take care of you. You deserve it. You have done an amazing job of standing by your unemployed person’s side despite the mental, physical, and spiritual turmoil that unemployment puts everyone through. So first of all, do yourself a favor and give yourself—your mind, body, and soul—a break.

How can you possibly give yourself a break at a time like this? Well, if you don’t, you’re going to keel over, for one. The truth of the matter is that unemployment is not what defines you or your partner completely. In other words, each of you is a complex, multifaceted human being who remains healthy as long as your mental, physical, spiritual, and relationship states are receiving attention. At this moment, unemployment is taking a toll on these four realms; however, the trick to lessening unemployment’s severe control is self-care.

Self-care means honoring the other facets of your personality and life, thereby diminishing the attention given to the unemployment monster. Take a look at the following short lists of self-care ideas that honor these other parts of who you are. You’ll find that many ideas can cross multiple realms:

Mental: Attend individual and/or group therapy. Meditate, listen to music, take a vacation alone or with a friend or partner, spend time with loved ones, take a class, or escape through watching movies or reading.

Spiritual: Pray alone or with others. Choose to be silent, join a group on a spiritual practice that you enjoy, light a candle and reflect, journal your thoughts and feelings, or attend spiritual events and retreats.

Relationship: Attend couples counseling. Create creative dates, like cooking from scratch together; do an activity together on a regular basis, like volunteering; take a week-long vacation from talking and thinking about unemployment; have sex.

Try any or all of these ideas, and keep adding to these lists. Find what works for you. You’ll see that given enough respite, you will have more energy to carry on your daily tasks until the “Great News” arrives. No one will be able to do this for you. You have to take care of yourself just as much as you take care of everyone and everything else. So, dear partners, be good to yourself and feed your mind, body, and soul. It is long overdue.