The Other Side of Cancer

May 18, 2010 • Share Your Story contribution by Kathleen Rohan, KnowCancer.com 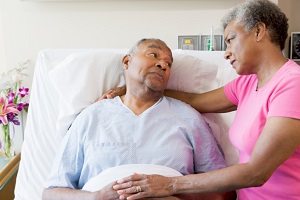 My husband, Nolan, firmly believed that if you looked hard enough, you could find something positive in any bad situation. I agreed, most of the time. Until he was diagnosed with cancer.

Very early on, we were told Nolan’s cancer was aggressive and in extremely difficult to reach places. It was spreading at an alarming rate. It quickly became immune to various types of chemo after a cycle or two, and only a few months into the treatments, many doctors said the fight was hopeless. No matter what we did, in the end, the cancer would claim his life.

From the beginning of his battle, Nolan’s one request was that our lives remain normal. He would do the same things he did prior to the news, from going to work to helping care for our son. He would not stop doing something that we would have done otherwise, unless it would put his health in extreme danger.

Despite our best efforts, our lives did change. I tended to obsess over how much I hated the changes. I hated watching Nolan get sick. I hated how the chemo made my husband, once an adventurous chef, hate the kitchen and all the smells that came from it. I hated how he had to spend weeks at a time in the hospital and could not see our son achieve small, yet important, milestones. I hated how I had to sleep in our bed alone at night, even when he was home, because he always found the couch more comfortable. I hated how Nolan was becoming less and less able, while our son grew and became more active. I hated how the cancer slowly continued to spread and gain strength despite all the treatments, doctors, drugs, prayers, and hope.

The cancer not only changed the logistics of our daily lives—which now included endless doctors appointments, diagnostic tests, tiredness, and long leaves of absence from work—but also changed our attitude toward it.

Ever since we began living together, Nolan and I had a tradition of talking each night. For the most part, this didn’t change when he got sick. As we talked each night, him propped up in bed supported by a pile of pillows, and I coming in from walking the dog, setting the dishwasher and checking in one last time on our sleeping infant son, he began to use phrases like “we are so lucky,” “we are so much better off,” and “I love our life.”

The phrases and words sounded so foreign to me and so far from reality that they would cause me to freeze, stop what I was doing as I showered and prepared for bed, and stare at him in disbelief. I did not feel lucky, better off, and quite often, I hated the road our life was taking. I hated that, slowly but surely, the cancer was changing it all piece by piece and I felt powerless to stop it.

While I often coped by whining about it, he somehow focused on how the cancer changed us for the better. Nolan didn’t want sympathy. He never threw himself a pity party, or came to mine, although no one would have dared blame him.

He argued that the cancer made us stronger, that it reinforced our marriage. While our friends fought or worried about petty things, we were thoroughly appreciating and enjoying every spare moment together. Our week-long trips to out-of-state cancer centers became mini baby-free vacations where we slept in late whenever possible and ordered large buffet breakfasts in bed.

More importantly, it enabled us to enjoy the good moments more, even if they were fleeting and seldom. When you have so few, they seem magnified and all the more sweet.

These conversations confirmed my belief that, as much as I wish I could have been the one diagnosed with the disease, I would have never been able to handle it as well as he did. And while he may not have been able to stay with me, these thoughts and memories always will, reminding me to enjoy every moment as it happens.

© Copyright 2010 by Kathleen Rohan. All Rights Reserved. Permission to publish granted to GoodTherapy.org.