The Debated Dress Is History, but Its Lesson Lives On 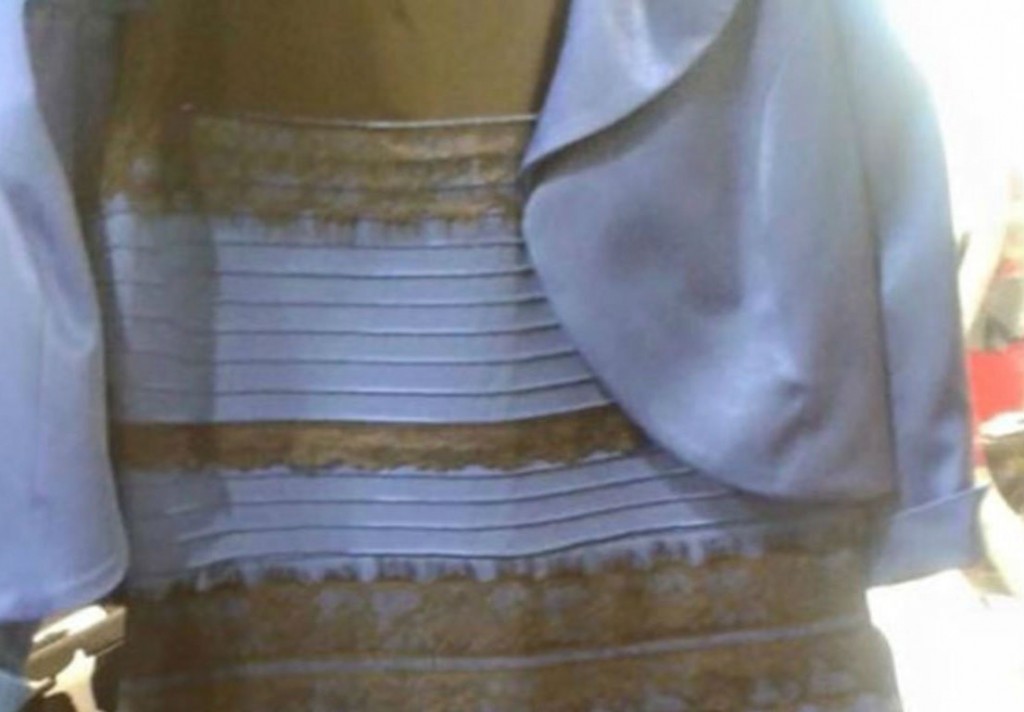 That blue and black and white and gold dress is fading from memory, but before it turns into a colorless and forgotten image, let’s take a look at the process of seeing. What did you see? What did your friends see?

Did you argue about it?

When I first saw the dress, it was clearly white and gold—I couldn’t understand what the fuss was all about—but as I looked more closely it passed through a range of shades and then morphed into black and blue, where it stayed. Spooky. I was registering the process of sight: how the information from my eyes is received and understood by my brain. The color receptors in my eyes didn’t change in the minutes that I witnessed the colors in the dress change. The way my brain processed what the color receptors received is what changed, causing me to see different colors at different times. The debate regarding the actual colors of the dress became a social media sensation because people mostly think that seeing is believing—but here was the perfect example that it may not be, and we just don’t like that. After all, if you can’t trust what you see, what can you trust? Also, who?

Which is exactly the point: the brain is not a tape recorder; it is an interpreter. That’s important to remember—what you think is true may not be. You may see the dress in a rainbow of different shades and colors. Don’t get hooked on one view. We have trouble taking in and understanding accurately what is out there, in the world, as well as what is within, inside ourselves. And the outside stuff and the inside stuff are densely interrelated, affecting our perceptions and what we think is “right.”

That can cause a lot of arguments. In the case of the now-famous (infamous?) dress, everybody was right and nobody was wrong, even if people changed their minds about what they saw, like me. We are all better off (and closer to reality) when we can hold onto the thought that often there is much more than one true thing, but people don’t like uncertainty. We want to know things absolutely. So let us all agree that in reality (?) the dress is black and blue and it’s absolutely not worth fighting about it.

The debate regarding the actual colors of the dress became a social media sensation because people mostly think that seeing is believing—but here was the perfect example that it may not be, and we just don’t like that.

It’s just not worth fighting. Wouldn’t it be good to remember that when you’re engaged in a “he said, she said,” for example, or a flat-out “that’s not what happened”? Many things likely happened, and many different interpretations and perceptions may be equally right, or just as wrong, as any other. So rather than holding tight to the notion that you are in possession of absolute truth in the first degree, it might help to concede that you might not be. We can’t always be 100% sure. Beauty is in the eye of the beholder, but reality? Not so much.

Can you believe what you see? Check out these optical tests. Try them all, if you like, but be sure to check out the Stroop Effect. In this brain teaser, the names of colors are different than the color named. For example, “RED” is written in blue. What you read is different than what you see, and your brain has to override the word and say the name of the color. The Stroop Effect has a variation that is used by military intelligence to detect spies. Like all subjects, a spy’s reaction times will differ when the color and the word are in conflict. If the word is in written in a language the spy pretends to not know, it will take longer to react because the spy has to override the brain’s response to language as well as color.