Teaching Tolerance: How to Foster Acceptance in Children 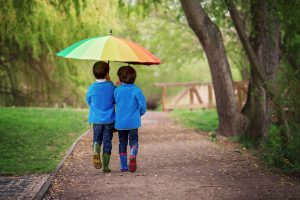 In times like these, when intolerance is everywhere you look—from political campaigns to schoolyard bullying to routine traffic stops—you might feel the way so many of the people I work with in therapy do: helpless. It can seem as if nothing you do makes much of a difference. Fortunately, there is a way to create real, lasting change, and that’s by teaching our children the ideal way to treat others. It’s the very definition of thinking globally but acting locally: increasing tolerance in the world starts at home.

It’s fair to assume most parents want to raise the kid who welcomes all friends, is kind to others regardless of skin color or religious beliefs, and is unafraid of differences. But with children receiving radically different messages every day (at school, on social media, and in the news), families must be proactive in being the most influential messengers in their lives. By raising children who are aware and accepting of differences, we can help ensure that their lives will be better—more peaceful childhoods, more successful careers—and increase the likelihood the world changes for the better along with them.

Here are seven simple strategies for encouraging acceptance and open-mindedness in your family:

1. Start as Early as Possible

For a long time, it was assumed we were born with the tendency to judge others. After all, our brains function by recognizing patterns (“t” and “o” make the word “to”) and categorizing information (“apple” and “orange” are both “fruit”). And some studies seemed to indicate that part of our brain (the amygdala, which registers emotions such as fear) lit up when we saw faces of different colors, indicating a subconscious detection of threat. The assumption that prejudice and racism are innate made it tough to figure out how to fight these insidious issues.

More recently, these findings have been largely debunked. And some new research goes even further, indicating that young kids are uniquely unprejudiced. One study carried out on children showed that the amygdala wasn’t activated until the age of 14. In other words, there’s reason to believe that if we model acceptance early and often, kids will pick it up easily and persuasively. So don’t wait to talk to your kids until you think they can fully understand—the conversation can start with simple concepts and progress to more complex ideas over time.

2. Check Your Own Attitude

The first step to transforming your children’s outlook is to look at your own point of view. After all, children learn by mimicking. Babies watch our faces carefully to pick up social cues. They smile when we do to get a positive reaction from caregivers. Toddlers study how others handle objects so they can manipulate a spoon or a television remote. And older children hear how their parents talk about others, and imitate language used at home.

Whenever you feel your anger rising or see it in your kids, stop and ask what the other people in the scenario might be experiencing. Could that driver who just cut you off in traffic be rushing home to a sick child? Might the man yelling at the drugstore employee have been fired recently? Could the bully at school have learned violence at home?

Because the ways we talk about people, stereotype, or express fear are noticed by our children, we have to be careful about our own, perhaps unacknowledged, prejudices. If we sprinkle a more compassionate viewpoint into the way we talk and act, our kids are more likely to take on this softer point of view.

In my practice, I’ve repeatedly seen the power of compassion. When people are angry or hurt, they tend to focus solely on themselves and how they’ve been wronged. Kids, especially young ones, are already primed to concentrate on their own feelings when they’re mad or sad. By asking them to put the focus on the other person, and by being empathetic to what the other party is going through, their eyes are opened. And sometimes, their anger just melts away.

You can apply this in everyday living. Whenever you feel your anger rising or see it in your kids, stop and ask what the other people in the scenario might be experiencing. Could that driver who just cut you off in traffic be rushing home to a sick child? Might the man yelling at the drugstore employee have been fired recently? Could the bully at school have learned violence at home?

These interpretations make us more understanding and less judgmental. By aiming a more considered response at the issue, we teach an antidote to thoughtless anger and hatred.

It’s simple, and in a way natural, to jump to conclusions about people or lump them into categories. A girl is wearing a too-short skirt in high school? Bad morals handed down from bad parents. A group of boys are wearing hoodies? They’re in a gang.

But racial and social issues are multi-determined, meaning there are a variety of factors leading up to any one outcome. To help your child learn how to think through an issue in a complex way, look for all sides to the story by asking them a lot of questions. Start with small, local problems: What might the girl in the skirt believe about sexuality? What does her culture teach her? How did the media affect her clothing choices? Then, as their thinking becomes more mature, move on to global issues, such as immigration. Some sample questions: What might it be like to grow up in a state where religious mores are the law? How would it feel to be forced from your country, and how might you feel about the people in your new residence?

If you want your child to truly believe that all people are equal, you have to walk the walk. Monitor how you respond to others and describe them. Is it possible that, sometimes without realizing it, you make a derogatory comment when someone is dressed in a way you find threatening? That you might respond to your child’s story about an annoying classmate by calling the kid “a jerk” or “stupid”?

Often, we feel more justified in making fun of our own community. I hear many families poke fun at their own customs or complain about older family members’ conventions. But this criticism can sound more insulting than you realize, unintentionally passing down an attitude to your kids that it’s okay to criticize other people’s beliefs or judge their way of life.

It’s becoming more common for schools to tackle themes of cultural variation and to celebrate differences. Knowing more about other people’s rituals and beliefs makes them less foreign and less scary. And seeing teachers value traditions other than their own sends a powerful message to kids about how to be respectful, open-minded, and accepting.

If your child’s school hasn’t already started a program or class in multiculturalism, consider bringing up the idea. Festivals, clubs, or after-school programs are some smaller venues for getting kids involved and starting conversations around tolerance.

Sadly, kids are being exposed to more and more violence and stories of discrimination. This also means there are many opportunities to talk through difficult issues. Although many parents are afraid of traumatizing kids by bringing up seemingly adult problems, the truth is kids are usually aware of the problems already and are often more capable of thinking about solutions than we give them credit for.

Go for honesty whenever possible, but go easy on the details, especially to young kids. Check in with them again later to see if any of the issues raised have caused them concerns or fears, or if they’ve heard anything scary from others. Don’t do all the talking; listen to their concerns, and ask if they have any ideas about how to help.

It’s okay to admit you don’t have the answers. Just sitting and experiencing sadness together can be healing in itself.

One big roadblock to compassion is the fatigue that sets in when we feel like we can’t possibly make a difference. When we take action, even in small ways, it’s an opportunity for kids to feel more involved and positive. Consider actions you can take with your kids that will help empower them, such as raising money, sending letters, or joining local meetings.

Another tip is to avoid segregating your children. Many parents hope to protect and shelter their kids by limiting their exposure to outside influences. The truth is, the more experiences they have and the more communities they join, the better able they may be to cope with the complexities of the world. Kids who go from private school to country club to family vacation, with no chance to branch outside of their community, may naturally be limited in their abilities to be flexible and open-minded. Volunteering in a different community, traveling, and joining clubs outside of their neighborhood are good ways to open their eyes.

Try one or more of the above suggestions at home. You may be surprised at how hopeful and proactive it feels to tackle this issue head-on. If you feel like you need more ideas, it can be helpful to work with a therapist or educator who specializes in working with children. Together, we can transform a moment that feels unrelentingly negative into something positive.