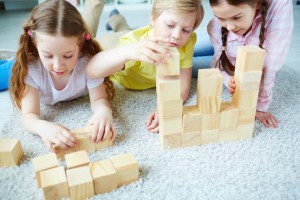 Retail giant Target announced earlier this week that it will end the practice of segregating children’s toys based on gender stereotypes. The move comes after an Ohio woman tweeted an image showing a sign differentiating between “building sets” and “girls’ building sets.” The tweet garnered more than 3,000 retweets.

Many stores separate items based on gender and surround them with stereotypical “boy” and “girl” colors. In kids’ toy aisles, toys that may be appropriate for either gender—such as building blocks or puzzles—are given an arbitrary gender label, which may increase the likelihood that someone will buy toys that correspond to a child’s gender, deterring the child from playing with toys that do not.

The Effect of Gendered Toys on Child Development

Target’s Facebook page is littered with commentary about the controversial move, much of it negative, and some organizations have called for a boycott of the retailer. However, research suggests that labeling toys according to gender can harm children, and gender-neutral toys may open new possibilities for both girls and boys.

In a study led by Judith Elaine Blakemore—a professor of psychology and associate dean of Arts and Sciences for Faculty Development at Indiana University-Purdue University Fort Wayne—researchers gathered 100 toys, classifying them according to gender. They found that girls’ toys usually emphasize physical attractiveness, nurturing, and domestic skill, while boys’ toys typically emphasize violence, competition, and danger. The researchers found that strongly gender-associated toys were less likely to be supportive of optimal development than neutral or moderately gendered toys. They concluded that toys most likely to benefit children’s physical, cognitive, and artistic development were often categorized as gender-neutral or moderately masculine. These findings suggest that toy labeling could deprive girls from access to educational toys.

Another study—led by Jamie Jirout, an assistant professor at Rhodes College—suggests that playing with blocks might improve spatial reasoning skills. Spatial reasoning is associated with the ability to read maps and may help children who want to enter science, math, engineering, and technology-oriented careers. The researchers found that children who often (more than six times per week) played with blocks and other toys associated with spatial reasoning skill building had higher scores on the Block Design subtest of the Wechsler Preschool and Primary Scale of Intelligence—a common test of cognitive ability—than those who only played with them sometimes (three to five times per week). When children believe toys are for the other sex, they may not play with them. Blocks are often assumed to be masculine toys, and some researchers argue that this early stereotype can produce significant differences in skill between the sexes by the time children become adults.

From Color-Coding to Gender Neutral

Kathy Hardie-Williams, MEd, MS, NCC, LPC, LMFT, a therapist who specializes in parenting, welcomes the change. “The move to change to gender-neutral toy aisles benefits children because it provides opportunities for children to develop a wider range of interests and skills. For example, it can encourage women to develop skills in technology and science, areas in which there is currently a shortage of women. The move helps to eliminate gender segregation.”

The change, Target representatives say, will be a gradual one. Over the next few months, the retailer will remove color-coded signs, replacing them with neutral signs indicating kids’ sections. Each aisle will note which toys it contains, rather than which gender the toys are for.