Children Opposing Parents: Talking Back or Positive Assertion of Self? 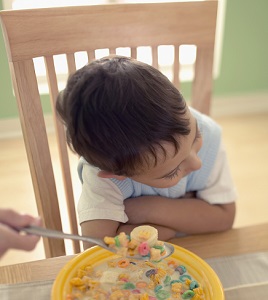 At every stage of development, children thrive when their parents listen to their ideas about what they want. When you consider and take your child’s perspective seriously—even if it’s quite different than your own—you are demonstrating your respect for their growing, unique, individual selves. This doesn’t mean you have to agree or say yes, but you do need to express your understanding of what your child wishes. By recognizing that your child is not talking back but instead asserting their developing self, you provide your child with the foundations for self-confidence and self-esteem. Differences create much less distance between parent and child when they are acknowledged and respected.

As I thought about a number of clients I see in psychotherapy whose parents had trouble distinguishing between talking back and self-assertion, I recalled a television show I saw recently. In that show, a six-year-old sitting at the dinner table with her parents suddenly announced she was a vegetarian. At first, the parents dismissed her claims and insisted she eat the meat in front of her. She stubbornly refused. After arguing with her a little, they ultimately respected her wishes. In the next scene the grandparents come to babysit while the parents went out. Grandma brought her granddaughter’s once-favorite meal that contained meat. The child stubbornly refused.  Grandpa insisted. The child refused. Grandma insisted, more refusal. Grandpa said “You will sit at this table until you eat your dinner.” Was the six-year-old talking back or asserting herself? The parents’ eventual response to their daughter’s announcement suggests they might answer that she was asserting herself. The grandparents, who ended up in a power struggle with their grandchild, would probably say she was talking back.

When our children say “no” to us, or when they ask us for things that we are inclined to say “no” to, we respond not only based on what our heads tell us. We have feelings about their differing wishes and perspectives. When our children assert themselves or oppose us in this way, it is useful to ask ourselves, “What am I feeling and why am I feeling it?” We can then look at our feeling responses as information that can help guide our behavior. For example, the grandparents in the television show might have been feeling that “this child is so hurtful, rejecting this meal that grandma made especially for her.” They may have felt disrespected. It isn’t unusual for parents to feel that they should be completely in charge of their children. When parents feel disrespected, they are likely to feel hurt and angry. In such a feeling state, it would seem to make sense to immediately say “no” to the child’s wishes. If we stop and look at our feelings, we may notice that we are hurt and angry and that we are expressing our feelings in the spoken “no.”  Paying attention to our feelings before going into action allows us to act in more thoughtful, respectful, and constructive ways.

If Grandpa thought about his granddaughter’s wishes, he might consider that she is trying on a new way of being in the world.  She is communicating: “I am an individual who is different from my family.” She is testing the question, “Am I allowed to be separate?” This perspective on the child’s behavior is very different than viewing her simply as a talking-back, ungrateful, stubborn child. The parents of this child also had negative feelings about the child’s desire to be a vegetarian. They said “no” but they reconsidered. Whatever they initially felt, they obviously thought about their response. Perhaps they recognized their daughter’s attempt to individuate her sense of self.

If we ask the question, “What am I feeling when my child asserts herself against my parental opinions and authority?” we can often avoid power struggles and tensions with our children. We can ask ourselves questions like: “What makes what our child wants wrong or disrespectful?” “Are children always supposed to go along with what parents want?” “What is going on with my child that she is responding this way?” “Why is it better for my child to wear my choice of clothes?” “Am I trying to avoid feeling embarrassed by my child?” “Why should I force my child to go to the park, or on a play date, or to a party when he doesn’t want to go?” “Why should I insist my child go to sleep-away camp even if she says she is scared?”

There are no right and wrong answers to these questions. These questions help us to not simply react. It is the parents’ job to determine which of their child’s demands are to be denied. For example, if the child refuses to go to the park and the parent thinks it is best the child be active or have fresh air, the parent may decide this is not a decision that is up to the child. However, it is always important when the child says “no” that you get more information. Suppose it turns out that the child who refuses to go to the playground is being bullied by the older kids. If the parent can get the child to tell them this information, the parent can then find a different playground, or help the child with the bullying. It is most important that the parent talk with their individuating child, making sure to listen and consider what the child has to say.

The process of individuation

It is part of every child’s normal development that after the infant emerges from the very special closeness (symbiosis) with mother, the processes of separation and individuation begin. The process of individuation includes the child’s exploration and experimentation with who they are and who they are becoming. As early as two or three, children begin to express their “no” emphatically and loudly. This is important in the development of self. For the young child, saying “no” is one of the earliest signs of individuation. It is stating that “I am separate from you and want something different.” When children can say “no,” they are preparing themselves to say “yes.”  Saying “yes” is an assertion of the developing self.  “Yes” is an announcement of who I am (or who I am becoming) and what I want.

While the individuation process is typically described as belonging to the early years of development, the process continues well into adulthood. It is often a surprise for the parents of adolescence to find they are dealing with the same issues that they faced when their child was two or three. The opposition, the tantrums, the stubbornness of the three-year-old have returned. The fights, the silent anger, the “you just don’t get it” feelings that adolescents express are continuations of the individuation process: the creation of the unique individual self.

Because teenagers need to be given more room to experiment with their selves, parents have a more difficult job of determining where and when to set limits. The dilemma is that adolescents need to develop more control over their lives, but they are more at risk with the wide range of possibilities available to them. No one would suggest parents give up limits around things like alcohol and drugs. But what do you do when you don’t like your child’s friend?  How do you respond to curfews, borrowing the car, requests for birth control? If you want to avoid power struggles, do the best you can to talk and listen to your adolescent. You also continue the process of examining what you are feeling about your child’s demands and requests. It is always important to know what your feelings are before you figure out how you want to respond to your child. The important thing is to talk with your child and respond with more than a “no” or “because I said so.”

Helping our children to become self-confident individuals requires that we talk with our children. We try to listen, hear and consider what our children are saying. This means that parents need to explore what children’s “no’s” are about. Why is the child saying no? What would the problem be for the child if she said yes? What would the problem be for the parent if they said yes to the child? When you work with your children to try and understand their point of view, they are more likely to be interested in hearing and considering your opinion. This talking will help your children to experience you as interested in them as individuals and they will be less likely to experience your ideas and decisions as arbitrary. This doesn’t mean there will always be agreement between parent and child. The same way that couples ideally try and understand each other’s points of view, parents and children—especially adolescents—have closer and more loving relationships when they develop the capacity to be curious about the other person’s experience.