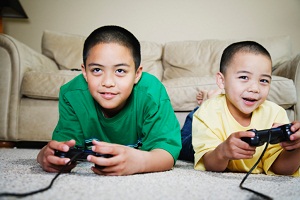 Whenever there’s a new technology, there are people there to debate its merits. And while video games are hardly new, they’ve exploded into the homes of families everywhere over the past decade or so, and many parents spend an inordinate amount of time pleading with their children to do something other than play video games.

There’s been much debate about whether violence and sexual images in games are harmful to children, and many parents are concerned about the impact regular gaming has on their children. While the content of video games matters and parents are wise to supervise their children’s gaming habits, an increasingly voluminous body of research is revealing some educational and developmental benefits of gaming.

Children tend to learn best when what they’re learning is relevant to their daily lives, and flashcards and perpetual drilling can make learning a miserable task. But video games offer promise for helping children master everything from basic grammar to complex math. When children enjoy video games, they’ll happily play games and may not even notice that they’re learning. Educators are increasingly incorporating video games into the classroom.

Gamers are often stereotyped as people sitting alone in front of a television or computer, never bothering to take their eyes off of the screen, completely uninterested in social interaction. But contemporary video games often encourage players from around the world to work together to solve problems or complete tasks. This can help build social skills and improve problem-solving abilities in children and adults. Particularly for self-described loners and introverted people, video games may be a less stressful way to interact socially.

Critical-thinking skills enable children to master concepts rather than simply accept rote memorization. This vital skill is key in many pursuits, including science, math, engineering, and the humanities. Video game players are constantly presented with novel problems, many of which they must solve in a split second. This process improves critical-thinking skills and can teach gamers the value of trying several different solutions to a problem.

Video games are increasingly realistic, and while this raises concerns about violence, it also offers new opportunities for teaching skills. Some schools now use video games to simulate real-life procedures such as surgery or flying a plane. Video games can also be used as a form of rehabilitation. For example, a 13-year-old boy with Erb’s palsy noticed marked improvement in control over his arms after playing video games.