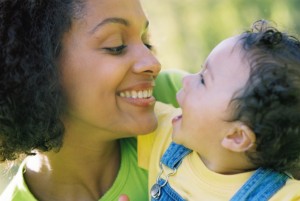 Parents who invest in pricey video tutorials or flash cards to help their babies learn to speak are often disappointed with the results. Pediatricians and other child experts have long observed that children learn to speak most quickly by interacting with adults, not by watching television or listening to recordings. Until recently, no one knew what made social interaction more conducive to learning than language videos. But a small study published in Developmental Neuropsychology attempts to show how social interactions are the foundation upon which language is built.

One of the earliest forms of social contact babies make is gaze shifting. During gaze shifting, the baby looks at an object another person is viewing. An example of gaze shifting is available to watch here. Previous research by the authors of this new study suggests that gaze shifting may help further the development of language and social skills in preschoolers.

To further explore the role of gaze shifting in language development, researchers recruited 17 9.5-month-old babies from English-speaking homes. Each baby had 12 25-minute tutoring sessions over four weeks. During the sessions, tutors spoke to the babies in Spanish, read them books, and played with toys. At the beginning and end of the study period, researchers tallied how frequently the babies engaged in gaze shifting when researchers showed them a toy.

After the tutoring sessions were over, researchers measured how much Spanish the babies had learned by measuring brain responses to both English and Spanish with the assistance of an electroencephalography (EEG) cap. Researchers found that babies who engaged in the most gaze shifting also learned the most Spanish.

This, they argue, suggests that babies pay attention to adult behavior, taking cues from adults about what is interesting. The social information babies learn from adults eventually helps them develop language. The study’s authors emphasize that their research highlights the need for parents to spend time actively engaging with and speaking to their babies.