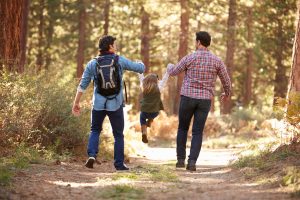 Gay fathers parent similarly to heterosexual fathers, and they report similar levels of well-being in their children, according to a study presented at the annual Pediatric Academic Societies meeting.

Last month, another study of female same-sex couples found no differences in well-being between their children and the children of heterosexual parents. Between 1 and 9 million children in the United States have at least one gay or lesbian parent, according to the American Association for Marriage and Family Therapy.

The study relied on self-report surveys distributed through online gay parent support groups and social media. The questionnaire produced responses from 732 gay fathers living in 47 different states. Thirty-eight percent had adopted or fostered children; 36% had children from a previous heterosexual relationship, and 14% had children with the assistance of a surrogate.

The survey asked about parenting experiences and daily life. Researchers then compared responses to answers of heterosexual fathers in the 2006-2010 National Survey on Family Growth. Both gay and straight fathers reported similar levels of well-being for their children, including similar strengths and challenges. They also engaged in parenting activities such as reading and going on outings at a similar frequency. This suggests daily life for children of gay men is substantially similar to daily life for children of straight men.

Although the survey suggests positive outcomes for gay fathers, it also found stigma and discrimination continue to be problems. Thirty-three percent reported difficulties receiving shared custody of their children. Forty-one percent encountered barriers in the adoption process, and 18% reported difficulties with using a surrogate.

The study’s authors say these numbers point to ongoing difficulties among gay fathers. Many researchers have uncovered bias against gay parents. In some states, gay parents are not entitled to take time off under the Family and Medical Leave Act (FMLA) when they adopt a child or welcome one with the assistance of a surrogate.