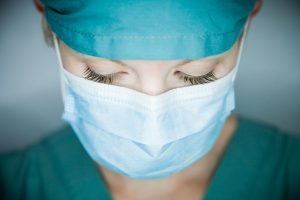 New research suggests even though physicians encourage their patients to disclose any mental health symptoms, stigma discourages many doctors from revealing any of their own mental health concerns.

The new study evaluated online surveys conducted with roughly 2,100 female physicians through a Facebook group for doctors who are also mothers. The responding physicians anonymously answered questions about their personal mental health over the course of their career. Nearly half indicated having met the criteria for a mental health condition at some point, but they did not seek treatment. Two-thirds of respondents admitted fear of stigma—professional or otherwise—had prevented them from seeking help.

In many states, physicians are required to report a mental health diagnosis to their respective licensing board. Some states require physicians to reveal complete mental health histories when applying for a state medical license, even if the issue was mild or fully treated in the past.

Even in states where the disclosure is only applied to recent years, the study points out that positive responses routinely result in greater scrutiny of the practitioner. The awareness of this reality, the study suggests, may be reason enough to dissuade many physicians from seeking treatment in the first place. People in the medical field may be worried about restrictions being placed on their medical license if they decide to report and seek treatment for a mental health issue.

In the online survey, just 6% of those previously diagnosed with a mental health condition indicated reporting it to their state board. Most said they believed their condition’s severity was not at a level that would compromise patient care. According to the study’s lead researcher Dr. Katherine Gold of the University of Michigan, some survey respondents admitted self-prescribing medication for their symptoms or paying in cash for doctor visits to avoid creating an insurance paper trail.

Previous research has shown doctors are at a higher risk of dying by suicide compared to people in other professions. It is estimated that approximately 400 doctors die by suicide in the U.S. each year.

Research has also shown medical students are 15-30% more likely to experience depression compared to the general population—though only 1 in 5 seek treatment, according to a University of California study.

Dr. Gold first became interested in the issue after hearing reports of physicians advising colleagues against seeking treatment for depression in order to protect their career. Her study emphasizes that more research is needed to better understand such patterns and behavior—both to help reduce stigma among physicians and to develop industry and state standards with more clear disclosure requirements.

Many physicians do not disclose mental health issues because the issue is in the past or is already well-managed and does not affect patient care. In many states, there is no official distinction in disclosure requirements between a mental health diagnosis that is under control and being treated and an impairment that affects patient care, furthering stigma for physicians who do seek care.