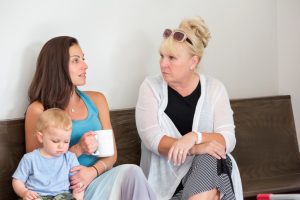 “Mom shaming” is the practice of criticizing a woman’s parenting choices, often without considering the role of fathers, other caregivers, cultural factors, or financial constraints in these choices. Parenting decisions can carry significant emotional and cultural weight. Mom shaming can be a source of distress that labels women as bad mothers.

To explore the prevalence and effects of mom shaming, researchers asked a sample of mothers of children ages 0-5 about their experiences with mom shaming. The survey asked about specific sources of mom shaming, such as breastfeeding versus bottle-feeding, sleep habits, and car seat safety. It also included questions about who shamed mothers and how they reacted.

Most women (61%) faced criticism of their parenting choices. Their parents were the most common source (37%), followed by their spouse or co-parent (36%) and in-laws (31%). Friends (14%) were less likely to criticize, as were other mothers in public settings (12%). Social media accounted for just 7% of shaming. Health care providers (8%) and childcare providers (6%) were also less frequent critics.

Discipline was the most common source of criticism (70%), though feeding choices (52%) and sleep (46%) also figured prominently.

How Does Shaming Affect Mothers?

Mothers reported a range of responses to shaming. Most sought out more information (60%) or asked a health care provider (53%). About a third (37%) changed the way they parent, but for most mothers, criticism solidified their belief in their own parenting choices.

A significant number (42%) also reported increased insecurity in their parenting choices due to criticism. Half said they avoid critical people, and 56% said their experiences of mom shaming caused them to stop criticizing other mothers.