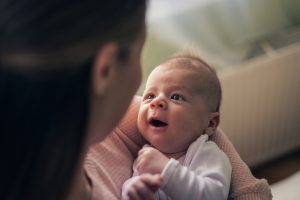 Use of antidepressants during pregnancy does not appear to change the behavior of newborns at 2-4 weeks old, according to a study published in The Journal of Clinical Psychiatry. The study’s aim was to assess whether newborns exposed to antidepressants showed any signs of withdrawal after birth. Other studies have looked at younger newborns, but this study is the first to assess potential withdrawal effects over a longer timeline.

Using the Finnegan Scale, which assesses for 21 symptoms of drug withdrawal in infants, researchers assessed each newborn. All three groups showed similar behavior, suggesting few or no withdrawal side effects associated with SSRI antidepressant use. Researchers determined any prevalent symptoms were a result of preterm birth rather than antidepressant exposure.

A 2015 study linked antidepressant use during pregnancy to a slight increase in the risk of a child developing autism. A 2016 study which attempted to account for differences between women who take antidepressants and those who do not found no link between antidepressants use and autism.

Another 2016 study found a four-fold increase in adolescent depression rates among teens whose mothers took antidepressants during pregnancy.