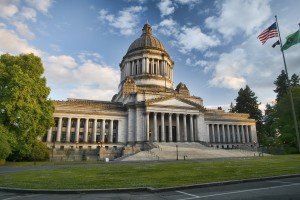 In Washington state, an extensive effort is underway to reduce suicides, specifically firearm-related suicides, which in 2014 accounted for more than half the suicides statewide.

Like many other states, Washington has seen an increase in suicides and suicide attempts in recent years, prompting Gov. Jay Inslee to order a comprehensive strategy as a matter of public safety. Last month on the capitol lawn in Olympia, a visual display of 1,111 color-coded tombstones depicted the number of lives lost in 2014. The stark disproportion of suicides by firearm was apparent, with their bright red markers overwhelming all other methods.

A report commissioned by Inslee establishes core principles for addressing the state’s growing epidemic. One such principle is recognizing suicide as a “preventable public health issue, not a personal weakness or family failure,” and recognizing that suicide “does not affect all communities equally or in the same way.”

A key recommendation from the Washington state report is changing the factors known to contribute to suicide risk, including childhood trauma, isolation, and lack of access to treatment. For those seeking more immediate help, a statewide effort at improving clinical and community services across local, tribal, and institutional systems is planned. 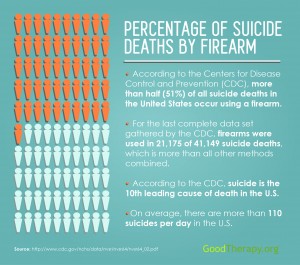 The annual suicide rate in the United States is 12.93 people per 100,000, according to the American Foundation for Suicide Prevention (AFSP). That ranks as the 10th leading cause of death in the U.S., claiming more than 40,000 lives each year.

Different parts of the country are impacted in different demographics, and some regions carry higher historical risk than others. In 2008, Harvard’s School of Public Health found several western states rank among the highest suicide rates in the country, including Oregon, Colorado, Nevada, and New Mexico. A grouping of Northeastern states—including Connecticut, Rhode Island, New Jersey, and New York—were among the lowest ranked.

The growing issue is especially prevalent among young people, with the National Institute of Mental Health estimating 2.6 million 12- to 17-year-olds in the U.S. had experienced at least one bout of major depression in 2013.

In guidelines released by the American Academy of Pediatrics in December, annual screening for depression is advised for people ages 11-21 to identify individuals at risk. Similar measures are proposed in several state plans.

Suicide statistics typically only reflect cases in which an individual dies, rather than including the much larger number of attempted suicides annually. According to AFSP, approximately 25 attempts are made for every suicide that occurs, with an average of 117 suicides per day in the U.S.—more than half involving firearms. This is confirmed by figures from the U.S. Centers for Disease Control and Prevention (CDC) for 2013, when 21,175 (51%) of the nation’s 41,149 suicides were identified as firearm-related.

One trend seen in several state plans is increased sharing of information, including an effort to find ways to utilize data from state agencies and law enforcement without compromising individual confidentiality. In Arizona, a strategy implemented by the state’s department of health services encourages government entities to share suicide data without naming deceased individuals.

Some state prevention plans have been refocused in the wake of growing and changing statistics. Texas undertook its statewide effort in 2014, then updated efforts based on growing firearm statistics related to suicide. In some states, updating the plans means increased emphasis on law enforcement, while others lean more heavily toward treatment and public awareness.

In 2013, 90% of firearm deaths in Vermont were suicides. Initiatives in that state include a joint effort between the department of mental health and gun shops to display suicide prevention posters that promote treatment options.

State plans often target the communities at greater risk in each state, including African American youths in Washington state and Native Americans in Arizona.

The Effect of Suicide on Communities

Local governments and universities are also developing and implementing plans in the wake of escalating tragedies. This month in California’s Santa Clara County, local leaders requested help from the CDC to conduct an epidemiological study following 10 youth suicides in Palo Alto from two different clusters—five young people died by suicide between 2009 and 2010 and another four died between 2014 and 2015. At the Massachusetts Institute of Technology, the loss of seven students to suicide in two years prompted school officials to add more staff psychologists while students organized a texting hotline called “Lean On Me.”

These public health epidemics affect individuals as well as communities. North Carolina college student Samantha Damsky lost her father to suicide in August 2013 and was stunned when more than 10 fellow classmates died at Appalachian State University in the two years that followed—many of them by suicide. She now works with ASFP organizing efforts to improve awareness beyond just the issue of suicide to also include its public perception.

“Most people do not know that it is inconsiderate to say ‘commit suicide,’ as you would not say ‘commit cancer’ or ‘committed a heart attack,’” Damsky said. “These types of deaths are caused by illness, whether mental or physical.”

Damsky is now organizing her school’s second annual Out of the Darkness Walk for April 16. 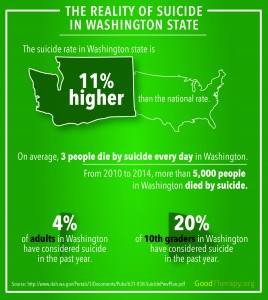 The Washington state report shares the story of a young soldier—home from deployment—who walked into Camp Murray’s Joint Services Support office (JSS) seeking assistance with job placement. When it was discovered the soldier was experiencing overwhelming depression, an abusive relationship, financial difficulty, and serious thoughts of suicide, the JSS quickly launched an effort to bring stability and support to the soldier’s life.

Within five weeks, the JSS multidisciplinary team had arranged regular therapy sessions, safe housing, and help with expenses. They assigned a suicide prevention mentor, refreshed the soldier’s resume, and then successfully secured employment with a prominent company in the area.

The report acknowledges the soldier’s experience as atypical, wherein an individual at risk is able to get assistance with multiple issues from within a single agency. Improving how state agencies communicate with each other is anticipated to make such success stories more common going forward.

If you feel you or someone you know are at risk for suicide, call the National Suicide Prevention Lifeline at 1-800-273-8255 or contact your local emergency room immediately.