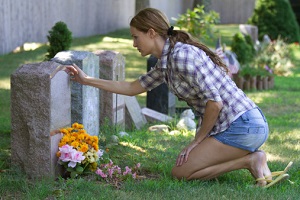 Most cultures and religions perform rituals to honor their dead, both when the person has just died and in subsequent acts of veneration. In this article I will focus on the latter and connect these rituals to the notion of legacy. The word legacy, for our purposes, is defined as something handed down from an ancestor or from the past.

• Jewish people erect a headstone at the gravesite approximately one year after the burial, light a candle on the anniversary of the death and place stones at the gravesite

• Buddhists and practitioners of other Eastern religious and spiritual traditions erect altars to their ancestors which they visit regularly, daily in some cases, to consult with the ancestral spirit

• The Yoruba (and all of its derivative traditions, including Voudoun, Santeria, and Candomble) honor their ancestors by erecting an ancestral shrine, leaving offerings, singing, and praying.

In addition to specific rituals, many families create foundations to keep the name and values of the dead person alive; others request donations be sent to specific organizations favored by the deceased during his/her lifetime. Let me not forget the naming of offspring after a beloved ancestor. (Some traditions clearly delineate which ancestor the child is named after.)

Since this is a column about about spirituality and not comparative religion, I’d like to share my thoughts about the connection between these rituals and legacy.

I recently learned in a visceral and profound way the spiritual and psychological reasons why we Yoruba venerate ancestors the way we do. When we pray we call out the names of those in our family lines, both family of origin and spiritual family, who have passed on and after each name use the Yoruba phrase Ibaye Ibaye Tonu. Ideally, there is no judgement attached to the practice; we don’t have to have known or liked the person whose name is called out. We do it to remember them. It is a way to acknowledge that they at one time walked the earth in human form and that they are connected to us. Recently I learned that the most important thing we can do for our ancestors is remember them. Everything else is a bonus—for both of us. Their legacy is strengthened by our naming them. We need to be able to separate our relationship or feelings about them from this simple remembering.

Why is that so important?

Think of this in terms of your own life. Although some of us don’t give it much conscious thought, we want to be remembered when we die. Why else would we care what people think of us? Why else would someone’s good name be so important and so much shame attached to a tarnished reputation?

Perhaps the most painful thought we can have is that we will be forgotten when we cross over, that no one will remember us and what we have done. This notion of a legacy is behind the creation of art, children, and monuments, establishing chairs in a person’s name at universities, funding the building of hospital wings, and, in a dark and disturbed way, committing violent crimes.

As I research my family history and create a family tree, I appreciate more and more the importance of being remembered and having others carry on the family legacy. I also appreciate the need to do something worthwhile during my lifetime so that I can leave behind the memory of the work I did while I was alive. I’d like to be remembered as someone who had good character, or Iwa Pele, as the Yoruba describe it. I’d like to think that as I fulfill my role in this world—the Yoruba believe it is the role I chose at birth—I will be remembered by those who have crossed my path, whether it be a family member, friend, significant other, patient, godbrother or godsister, or neighbor, as someone who contributed something positive to their lives.

That in part is why a spiritual path is important in the healing process. As one heals and moves forward in life, part of that journey is the development of Iwa Pele (good character). It is not often explicitly defined as a goal of living a spiritually-guided life but in my opinion is an inherent part of it.

Since I would like someone to call out my name when they remember their ancestors, I honor my own ancestors. I would like to be remembered, so I remember. Maferefun egun. We praise those who came before us and created the way.