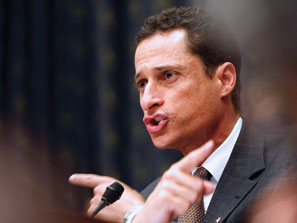 So here we go again. Another public figure admitting to erroneous acts that skirt just outside the confines of his marriage. But is it infidelity? When Arnold Schwarzenegger came clean about fathering a child out of wedlock, at least there was concrete evidence that people could look at and say, “Ah, hah! He definitely cheated!” But with virtual flirtation, recognizing when someone has crossed that line becomes a little more difficult. When does social media contact become infidelity? If my husband instant messaged an old buddy from high school, I probably wouldn’t mind. But if it was an ex-girlfriend, I know I would feel differently. And if he tried to hide it from me and lied when confronted with the evidence, it would become more than suspicious.

This is the dilemma many spouses find themselves in. Having sought therapy myself for a similar situation, I understand how it feels to have the bond of trust destroyed. I understand how it feels to be lied to. The reality is that more and more people are finding themselves in these situations every day. Rather than turning inward toward a spouse, or trying to resolve marital issues through therapy, communication and hard work, many people find it much easier, and instantly gratifying, to feed their egos through seemingly innocent virtual contact.

Gone are the days where you go flirt harmlessly with the bartender at the local watering hole to get that emotional pick-me-up (and that’s dangerous too). Nowadays frustrated spouses grab their smart-phone, laptop or iPad and begin reaching out to old flames or even complete strangers. If they weren’t already vulnerable, perhaps it would end there. But the truth is that social media has made cheating more than a temptation for people on the fence of infidelity. It has made it an accessible, efficient and clean way to keep a dirty little secret. Whether someone is addicted to sexual infidelity or not, what can begin as a few simple emails can quickly spiral into a full-blown emotional affair. And that is exactly what it is, an affair. I have heard it said many times that it is cheating if you can’t do it in front of your spouse. And I highly doubt Anthony Weiner’s wife was taking the now infamous pictures of him. So, call it what you want, I’m sticking with full-fledged infidelity.

And what does this do to the spouse? What type of issues does that person develop as a result of the infidelity? First of all, their self-esteem takes a big hit. They begin to compare themselves to the other person, or people. They doubt their physical appearance, their ability to satisfy their partner, their own self-worth. And they develop significant trust issues. I can tell you from my own experience that I forgave my spouse, almost immediately. But forgetting? That was another story entirely. As much as someone can try to put those images, messages, feelings of hurt behind them, the guilty spouse is a daily reminder of the trauma. Trusting again becomes an immense challenge. And for people who suffer with mental health issues on a good day, the shock of this type of event can have a significant impact on recovery.

So what should we take away from all of this? Should Wiener resign because he’s a cheating husband? Before we cast our vote for the next candidate, should we demand a virtual forensic inventory of their electronic gadgets to see if they are beyond reproach? Should we spy on our spouses to see if they are engaging in virtual escapades? Or should we delete some of the friends on our own Facebook pages who may tempt us when we ourselves are feeling less than desirable? As nice as it would be to have an infidelity filter installed on all of our devices, it would not solve anything. If there is a problem in the relationship, or with the person seeking attention, the problem will still exist. And that’s where recovery should start. People should stand up and take responsibility for their actions from the get go. They should stop the insanity and save what little bit of dignity, and chance at forgiveness, they have. Perhaps they may even have a shot at redemption when they admit they are only human.

Some people believe social media is the root of today’s infidelity. I disagree. If someone is inclined to cheat, you can take away their Blackberry and you’ll most likely still find them at the local watering hole, hitting on that bartender.

Related Articles:
What Is the Right Thing to Do When an Old Lover Connects With You Online?
Social Networking & Sex Addiction Challenges
Tiger Woods’ Tale: Apology and Forgiveness