Smoking During Pregnancy May Be Linked to Schizophrenia 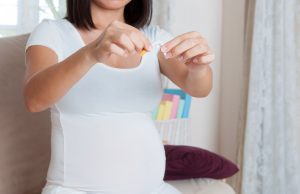 Smoking during pregnancy increases the likelihood that the fetus will develop schizophrenia later in adulthood, according to a study published in the American Journal of Psychiatry.

Previous research has shown smoking during pregnancy can increase the risk of miscarriage, damage the placenta, lead to preterm labor and low birth weight, and increase the risk of sudden infant death syndrome (SIDS) and birth defects. According to the American Pregnancy Association, 12-20% of pregnant women smoke.

The study compared outcomes in people prenatally exposed to nicotine to those who were not exposed to the drug. To compare the two groups, researchers gathered data on 977 Finnish cases of schizophrenia drawn from a study of all births between 1983 and 1998. The study included almost a million prenatal blood samples.

The team compared outcomes in the children of women who had cotinine—nicotine’s primary metabolite—in their blood in early or mid-pregnancy to those who did not. The findings showed women who smoked during pregnancy had an increased risk of giving birth to a child who later developed schizophrenia. Among women who were heavy smokers, the risk increased by 38%.

The study controlled for other factors that might increase the likelihood of schizophrenia, including a parental history of psychiatric diagnoses and socioeconomic status, but the risk still remained.

The study relied on blood serum levels of nicotine and self-reports of smoking. Because the data was collected before the widespread use of electronic cigarettes or nicotine replacement therapy, fetuses exposed to nicotine were likely only exposed through cigarette smoke. This research does not provide information on whether other forms of nicotine consumption pose similar risks, but it does establish a correlation between nicotine exposure and the later development of schizophrenia.