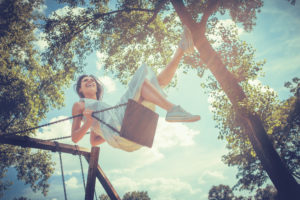 It’s really fun to be a rabbit!

I just returned from a well-known festival of art, music, and barely controlled chaos. (Just to give you a general idea, it has its roots in a San Francisco organization called the Cacophony Society.) This festival is participant-driven: you don’t just buy a ticket, show up, and passively absorb the entertainment. No, like it or not, you are the entertainment, or at least one small part of it.

With this philosophy in mind, I put on my rabbit ears, walked a couple of blocks, and joined an annual event called the Billion Bunny March to Protest Humanity.

I must say, this is probably the silliest thing I’ve ever done—and I had a total blast! There were a few thousand of us, dressed in rabbit ears and whisker makeup. Following our enthusiastic, overdressed leader of long-eared rabbit ruckus, we marched into the Center Camp Cafe, “took it over,” and complained vehemently about humans’ poor stewardship of the planet (especially for rabbits). Then we stampeded over to the radio station to further protest humanity over the airwaves. After that, it was on to the central effigy of the festival, where we evaded “animal control” and “wolves” and chased “carrots” that looked and moved suspiciously like humans.

By the end of the hour or so, my face literally hurt from smiling so much. It was just so silly. My energy felt open and clear, and I felt I had more wind in my sails to deal with whatever issues might be coming my way. (And they did. They always do. That’s just life.)

The study of the human threat response is pretty serious stuff, as is the actual experience of feeling threatened. Many survivors of developmental trauma forget (or never learn) to frolic, play, be silly or frivolous. They become involuntarily stuck in the trauma response, to some degree, even at times when it would serve them better to loosen up and be playful, or at least relaxed. (This is, in my experience, a large part of why some turn to alcohol or drugs: to bypass these chronic, involuntary feelings of bracing and stress, and get their nervous systems to just finally feel good.)

Not surprisingly, fun, play, and frivolity are often very good antidotes to the seriousness of the survival response. Sometimes, we first have to work with some trauma-induced rigidity before the person is able to loosen up and check out the fun. Other times, people are able to dive right in, laughing and questioning why they’d forgotten to do this all along.

Peter Levine, the founder of Somatic Experiencing, teaches us to “dance” with trauma. Too often, people avoid their traumatic material altogether. Others plummet headfirst into it, resulting in flooding and overall worsening of their symptoms. Peter’s concept of “pendulation” involves supporting the nervous system in moving into the traumatic material, metabolizing a small bit of it, and then moving back out into resource and life’s goodness. In this way, we “dance” fluidly in and out of the trauma, neither avoiding it nor getting stuck; biting off one manageable mouthful at a time.

So then, in Peter’s model, the opposite of the traumatic material is called “resource.” Resource involves connecting with anything (anything legal; non-harmful; and non-toxic, that is) that makes us feel good: interpersonal connections, pets, hobbies, physical exercise, music, or the aforementioned sense of fun, frolic, and whimsy. Basically, resource puts the wind back in our sails; it reconnects us to the felt sense, embodied experience that life can actually be really good. We can feel it in our bones.

The example of the Billion Bunny March is rather large and, to be fair, a bit extreme. For some, it may take quite a while of beginning to experience silliness before they are ready for something like that. (Theater people, on the other hand, may find this sort of exercise to be entirely natural!) In any case, small bits of whimsy are readily available if one knows where to look.

I recently obtained several small rubber children’s toys from the sale section of a local department store. When the people I work with in the therapy room start to get stuck in a traumatic state, often I will invite them to stand up, move, and play catch with me using these small rubber toys. For most of them, the movement and the simple game bring them right into the present moment of childlike fun. Or they might explore the can of “slime” I purchased at the same time: gooey, flowy, and nonsensical, it exists solely for the sake of the unusual sensory experience it provides. For some, it evokes curiosity, even wonder.

This sense of fun and whimsy, unavailable to many stuck in the threat response, is ultimately the source of creativity, joy, and innovation. Remember, trauma therapy can—indeed, must—be fun sometimes. Otherwise, why bother?