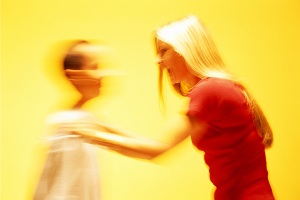 Even though there can be life long debilitating psychological effects, sibling abuse may be the most ignored—if not accepted—form of domestic abuse (i.e. sexual, physical, emotional). Why is this kind of abuse ignored or minimized? There is a lot that is swept under the rug in the guise of “sibling rivalry.” And American law does not consider this a prosecutable offense unless a child is turned in by their parent(s). In other words, parents would have to be willing to file an assault charge against their own child. So parents keep this type of abuse within the family. And a lot of the time, they even blame the victim.

First some statistics: In an article entitled “A Major Threat to Children’s’ Mental Health,” Hart & Brassard reported that “There is evidence that brother-sister sexual relationships may be five times as common as father-daughter incest.” Finklehor and Baron, who are prominent researchers in the area of child abuse, state that “sibling sexual abuse is prevalent in a remarkably large quantity of individuals from virtually all social and family circumstances.” And a survey of 796 undergraduates of six New England colleges found that 15% of the females and 10% of the males reported having some type of sexual experience involving a sibling (Sibling Abuse – Wiehe). In this same publication it states that parents are aware of sexual abuse among siblings 18% of the time, emotional abuse 69% of the time and physical abuse 71% of the time.

Sexual abuse aside, how do we define or recognize abuse among siblings? When there is an inequity in power between two adolescents and one uses control over the other to repeatedly hurt, threaten, or degrade, that is abusive behavior. Even name calling and ridicule can wear away at a child’s self worth and self-esteem. “Children are especially vulnerable to degrading remarks because it is during their childhood years that they are developing a positive sense of self.” Unfortunately, most parents see this behavior as sibling rivalry. And while most emotional and even physical abuse, should and can be handled by parents rather than the law, first parents have to recognize that it is abuse.

Sexual abuse is another story. Most incidents of sexual abuse by siblings go not only unreported but also undetected by parents. Most times, the siblings themselves recognize that what is happening is wrong and certainly it is recognized by society as wrong. So unlike physical and emotional abuse, this should be easier to detect by parents. But most kids don’t tell. They don’t tell because the older sibling is an authority figure, or because they are threatened or scared, or because they don’t realize that it is abuse because they blame themselves as much as their sibling for what is happening. And unlike physical or emotional abuse, it is happening secretly because the older sibling knows that they have crossed a line.

What causes one sibling to abuse another?

1. Acting out anger at parents on sibling or acting out anger at an older sibling on a younger sibling.
2. Parents overwhelmed by their own problems not paying attention.
3. Inappropriate expectations – older sibling given too much responsibility or freedom.
4. Mirroring parents behavior.
5. Viewing the behavior as normal by parents.
6. Socialization of males as dominant over females.
7. Contribution of victim. “Research supports the hypothesis that the behavioral patterns of the abused child tend to invite further abuse” (Wiehe). It becomes a vicious cycle.
8. “It is important to note that this interactional cycle theory does not blame the victim!” Rather it identifies a pattern in order to treat and help prevent further abuse.

What are the long-term effects of sibling abuse?

Time does not necessarily heal. Adult victims of childhood sibling abuse generally have lower self-esteem and are overly sensitive and insecure. They have trouble with relationships and repeat the victim role in their other relationships. They can have sexual functioning problems. There is continued self-blame at the same time that anger at their perpetrator is played out with others.

So how do parents and other family members distinguish between abusive and normal (sibling rivalry) behavior?

1. Is it age appropriate?
2. Does one child appear to be a constant victim?
3. Is the purpose of the behavior humiliation, sadism, to cause suffering, a result of a continual explosive anger?
4. Was the behavior planned, has it happened before, does the perpetrator feel remorseful?
5. Was property destroyed or animals abused?
6. The length and the degree of the behavior. One-time incidents, if serious enough (i.e. sexual abuse), can create a life long problem. Whereas name calling, ridiculing, and even teasing if done consistently and at certain vulnerable ages (i.e. between six and seven years and/or between eleven and twelve years of age) can also create life long problems.

We need to build awareness and educate families about the difference between abusive and normal behavior among siblings. Listen to children and believe them. Good supervision and encouraging openness about discussing sex while informing children to “own their own bodies” and respect others are simple, logical steps towards protecting our children from abuse by siblings, cousins and other children.