Part II: Should You Attend a Friend’s Wedding Even If Your Heart Says “No”? 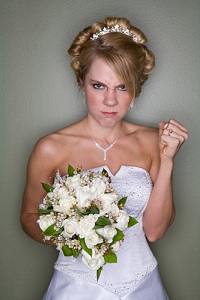 If you remember from last month, Ellen had to decide about attending her friend Robin’s wedding, to be held in a far away resort- it would be a lot of fun, but Ellen didn’t have enough money to go and couldn’t take time off from her new job, either- she was scared she might be fired- she liked the job a lot, and jobs can be hard to come by. On the other hand, even though Robin came from a big family and everyone planned to come, the most important people of all, Robin’s parents, had died several months earlier in a car crash and their absence felt like a giant hole in Robin’s world.

Ellen was torn- but mostly she felt like she should stay home and not put herself in financial jeopardy. Most people who wrote in to share their opinions about what they thought Ellen should do also believed that Ellen should stay home, and then celebrate privately with Robin later on. In fact, that’s what Ellen decided too; she spoke to Robin and apologized in advance that she wouldn’t be able to attend the wedding, mailed her a lovely gift, and some time later invited Robin to a picnic party to celebrate the wedding, but Robin was miffed and, even though she agreed to go to the party, she never showed up. Maybe the friendship is over, which is what Ellen was afraid of in the first place.

Robin more than wanted Ellen to come to her wedding, she saw it as a decree- Ellen MUST COME, but an invitation is not the same as an order, just as a desire is not the same as a necessity. Robin really wanted Ellen to be there, but did that mean that Ellen had to go? Missing the difference between desire and necessity caused lots of misery for everyone. Ellen felt bad about the broken friendship. Robin felt bad because she doubted that Ellen ever really liked her in the first place; everyone’s feelings were hurt.

This month, let’s look at Robin’s side of the dilemma. Here are some ideas to kick around:

1. Robin worked very hard putting together a once in a lifetime celebration. She wanted everybody to come and have a good time at her destination wedding. The celebrations would last for several days.
2. Robin’s parents had died, the two people she most wanted to be there for her. She needed to feel loved, but instead she felt like Ellen had rejected her.
3. Ellen and Robin weren’t best friends, but they had known each other for a long time and Ellen had helped Robin when her parents died. How could Ellen even think about not coming?
4. How could Ellen leave her in the lurch, knowing how she felt?
5. Maybe Ellen never was a real friend in the first place.
6. Wasn’t Ellen obligated to come? Didn’t she owe it to Robin to be there?
7. Maybe the wedding plans weren’t good after all.
8. Maybe Ellen was just plain jealous. After all, she didn’t have as much money as Robin, and she wasn’t married either, or even engaged.

Why look at Robin’s side of things? It’s an exercise in understanding somebody else, a way to develop empathy and become more fully alive citizens in the world. Part of growing is learning to feel our connections with others. Spiritually and psychologically we benefit when we see all that we have in common, rather than what separates us.