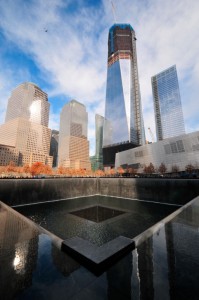 As I sit here in my upstate NY cottage on a chilly late summer morning, I am suddenly aware that today is the anniversary of 9/11. It has been floating in and out of my consciousness lately. This is mostly due to the controversy in the news about the proposed Islamic Center on the site and of the report of a preacher threatening to burn a copy of the Koran.

Like many anniversaries we may have lived through, the tendency is to remember where we were on that day. Perhaps we remember anyone we may have lost. I personally did not lose anyone in particular that day and was myself far away on Manhattan’s Upper West Side, safe from harm.

But that is not to say that I and many others did not lose something. For me, it was the illusion of security and safety in my environment. I notice for example, that when planes fly overhead in what seems to be a  flight pattern, I get anxious. Or when there are fire engines at the entrance to the subway, my fears of a terrorist attack are activated.

I clearly have to work harder at maintaining my serenity while in Manhattan since that day. I also have a deep sadness for those who died and for those who continue to suffer. I am not only referring to those who survive 9/11 victims, but also those whose anxiety was kicked up several notches as a result of the attack, those whose posttraumatic stress (PTSD) symptoms increased, and those who lost faith in our leaders to protect us. They come to me for help and although sometimes it slips my mind for a short time in our work, when we begin treatment I always make sure to ask, “Where were you on September 11?”

What affects me personally the most is the new construction at the site. I am a Yoruba priest who recognizes the role of ancestors in present, daily life. Because of my spiritual practice, I am acutely sensitive to the violation of a sacred burial ground. And I can only shudder to think of the repercussions of building on what I feel should be a place of healing, and not of profit and commerce. Do we really need more office spaces in this town? I think not. Last I read, there was an abundance of both office space and built structures in New York City.

Perhaps my vision is a cliché. But clichés are come to be for a reason. I would like to see green and flowers and trees, and places for people to sit and meditate and interact. Not in just a part of the area, but throughout the entire financial district. It would help to soften the energy of the district which was the target. We have an opportunity to show ourselves and the world that we may be the most powerful and wealthy country in the world, but we are also humane and we honor our dead.

It has never served us to build over a sacred burial ground. In the same way it has not served me to just inhabit the property I live on in upstate New York without honoring the Native American ancestors who first occupied it. The truth is that I will not find peace of mind here if I neglect them in the place they lived and died. Consequently, I have made it a point to honor them in ways that acknowledge presence and memory.

So on this anniversary, I encourage readers to think of ways of honoring those who died on 9/11 and to pray for their elevation into light. This is also a call to action to remember those who continue to suffer. They carry the burden for us all.