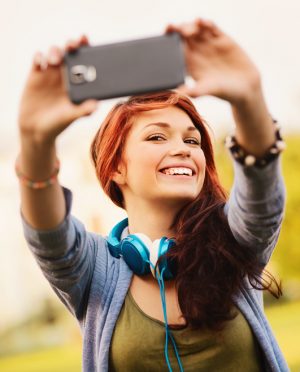 Selfies are virtually unavoidable on social media. Google estimates social media users took 93 million selfies each day in 2014. According to new research published in the journal Frontiers in Psychology, people tend to perceive their own selfies differently from the other selfies they see. This can create a discrepancy between how people see themselves and how others see them, potentially lowering self-esteem.

Selfies: Why People Like Taking Them, Not Seeing Them

Researchers administered a survey about selfies to 238 people living in Germany, Austria, and Switzerland. Seventy-seven percent of participants said they regularly posted selfies on social media. Yet, 62% saw selfies as staged, and 62-67% said selfies could cause problems such as low self-esteem. The majority (82%) said they preferred to see photos other than selfies on social media.

The study’s authors suggest, taken in isolation, the data mean selfies should be unpopular. They suggest a “selfie paradox” might explain this discrepancy. Social media users see selfies as inauthentic and self-promoting, but they view their own selfies as ironic or authentic. They also reported being less committed to their own selfies than other users were to selfies. This enables them to avoid viewing themselves as narcissistic or self-promoting.

Some previous research also suggests selfies may affect mental health. A 2016 study of people mostly ranging in age from 21-24 linked greater use of selfies to narcissism, attention-seeking, loneliness, and self-involved behavior. People who took large numbers of selfies often felt they had weak relationships with others, and they believed their personal lives were in decline.

In 2013, experts offered their opinions on the mental health effects of social media.